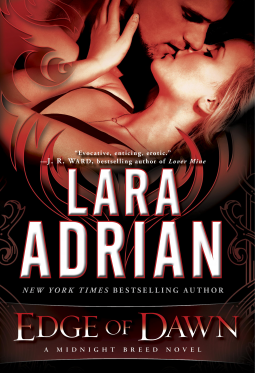 Twenty years after the terror of First Dawn—when mankind learned that vampires lived secretly among them—the threat of violence reigns as the two species struggle to coexist. The only group preserving the fragile harmony is the Order, an elite cadre of Breed warriors dedicated to protecting humans and vampires alike. And in this precarious world of torn loyalties and shattered trust, Mira, a fiery squad captain, finds that every fight bears an intensely personal cost.


Raised among the Order, Mira has always believed in the warrior’s code of swift—and even lethal—justice. But the one thing she desires more than the Order’s hard-won acceptance is Kellan Archer, a sexy but troubled Breed fighter. In love with him since childhood, Mira once broke through his tough exterior during an unexpected night of rapture, but the next day he mysteriously disappeared, never to return.
Kellan didn’t think he would ever see Mira again—or have to confront the truth of why he left. After abandoning the Order years ago, he now leads a band of human rebels intent on carrying out their own vigilante rule of law. Yet a high-profile kidnapping assignment brings him face-to-face with the past he sought to avoid, and the striking woman he has tried desperately to forget. And as tensions mount and the risk of bloodshed grows, Kellan and Mira must take sides—between the competing missions that dominate their lives, and the electrifying passion that claims their hearts.

I have read all of the stories in this series and I was pleasantly surprised to find out this one was about Mira, who we first met as a little girl who's gift was abused by those around her.

This story finds her as a very broken woman ever since the loss of the man she loved since she was a child. Kellan was her first everything. She is a Breedmate who has worked hard to make it as a Team Leader for the Order. Her hatred for the Rebels runs deep and she often lets her emotions control her actions. Even after Eight years, she refuses to let go of her love for Kellan.

After a rash decision leaves her demoted to babysitting a genius she finds herself kidnapped by Rebels. Imagine her shock at finding out the leader of the Rebels who have captured her is none other than the man she has believed to be dead for eight years.

The amount of betrayal and mistakes these two have to overcome is heartbreaking, but the way their relationship builds back up is beautiful.

This story is a great addition to the series and it even introduces a new enemy for the Breed which sets up a new battle that is imminent.

Love this series. Paranormal Romance at its best!