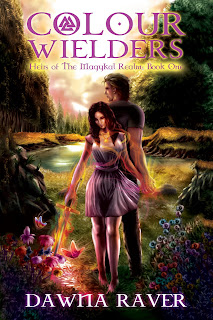 Behind the Faerying Mysts, hidden from Mortal eyes, is a land where gods and creatures of myth and legend dwell. And in the Mortal Realm, their Princess is hidden away.
Quinn Sinclair lives an ordinary life with her less-than-loving mother in Conifer, Colorado, clueless of her true nature. On the night of her birthday, a staggering betrayal sends her life spinning out-of-control. As she struggles to pick up the pieces, a vision of a man with haunting tourmaline-blue eyes begs her for help, and she is transported into a Magykal battle-forever changing her life.
Arik Morgaine-Demigod bad boy and outcast of the Magykal Realm-tried to avoid contact with Princess Quinn for eighteen years, not wanting to make good on an old threat. But the fates have other plans. Arik can no longer deny his growing desire for Quinn, or the need to protect her from those wanting to control her burgeoning powers. Can the two of them come together and save the Magykal Realm from being destroyed by the Darkest of Magyks?

My Review:
My first thoughts were ooooooo mythology! Mythology in fantasy novels done right is wonderful to read. I think Dawna Raver did a great job of incorporating it into this story. At times I did feel like there was a bit of an information overload, but it all worked in the end.

New Adult in the Paranormal/Urban Fantasy world is something that has not been done as much yet, so this was nice to read since I am on a huge New Adult kick lately!

I like that this had similar themes of those in Contemporary New Adult books, ex. reforming the bad boy.

One thing that was definitely not lacking was the action. I felt like this one was action packed from the beginning and most definitely kept me flipping pages!
Posted by R.K. Emery at 7:47 PM