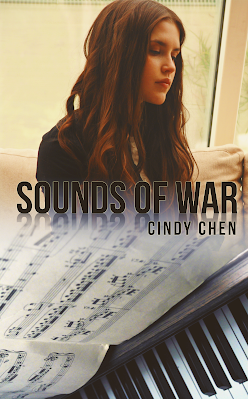 People were dying. Bodies were lying along the streets. Air raid sirens were about to go off at any moment. Nobody was shown any mercy. For Anna, life had always been about music. An aspiring pianist and composer, she studied at the renowned Leningrad Conservatoire under some of the greatest musicians to ever walk the face of the Earth. Her studies came to a halt, however, when Nazi troops surrounded Leningrad in September, 1941, intending to shell and starve the city into submission. She watched as her oncebeautiful city transformed in front of her eyes: people became living skeletons, their only food being a mere 125 grams of ration bread a day; buildings were reduced to rubble, pieces of bricks and broken glass strewn along the streets; cats, dogs, rats, and horses disappeared as people chose to eat them instead. One by one, the citizens of Leningrad were losing hope, and Anna was desperately trying to find a reason to hold on and a way to continue… Sounds of War is a poignant tale about the strength of human determination and the power of great music.

The writing in this novel was as beautiful as a song.

This book to me was very imaginative while being real and historic. It took real life themes and gave us a person to tie to it to make us feel it in an entire different way. The addition of the music and Anna's love of that gave us something to be passionate about.

The horrible struggles and strife make for a very emotional read. The theme is powering through and never losing hope and I got that 100% from Cindy Chen's writing.

A Taiwan native, Cindy Chen immigrated to the United States when she was 9 and lived there ever since. She started writing at age fourteen and started writing longer works of fiction in 2013 when she first participated in National Novel Writing Month (NaNoWriMo). At age sixteen, she was awarded second place at the Georgia PTA Reflections contest in the literature category with her short story “To Believe,” and at age seventeen, she published her first book titled Sounds of War as part of her high school senior project. Though currently a student at Cornell University with the hopes of pursuing a career in the medical field, she enjoys playing the viola, blogging, and making youtube videos in her spare time and considers writing one of her greatest passions.


a Rafflecopter giveaway
Posted by R.K. Emery at 7:38 AM