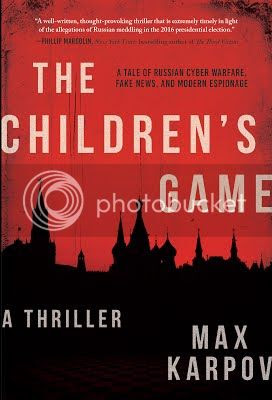 The CIA has learned that the Kremlin is about to launch a sophisticated propaganda operation aimed at discrediting and disrupting the United States and ultimately restoring Russia to great nation status. Intercepted intelligence suggests that the operation will hinge on a single, breaking news event in Eastern Europe, supported by a sustained campaign of disinformation and cyberattacks. Code-named the "Children’s Game"--a chess stratagem that leads to checkmate in four moves--it was probably conceived by a Russian billionaire and former FSB officer named Andrei Turov. For years Turov has been developing the infrastructure for a new kind of warfare that exploits weaknesses in western democracies and manipulates public opinion. His organization offers the Kremlin plausible deniability.

But the United States has its own secret weapon: Christopher Niles, a former CIA intelligence officer, who understands Turov's ambitions and capabilities. It falls to him and his small team--composed of his journalist half-brother Jon, a special forces operative he would trust with his life, and Anna Carpenter, a resourceful US senator with deep roots in the intelligence community--to unravel Turov's plot and restore truth to a world spiraling into chaos.

“Max Karpov has produced a cleverly conceived thriller that … captures perfectly the mentality of Vladimir Putin’s Russia … And, on top of it, the book is near impossible to put down. A must read.” – Michael Morell, Former Acting Director and Deputy Director, CIA


Get your thinking cap ready and make sure you don't have any pets that can make sudden noises while reading, this one may make you a bit jumpy.

I really enjoyed the individuality Karpov brought to this novel. It manages to set itself apart from other Thriller novels I've read recently. There is a definite theme and setting that he wants his reader to understand when reading.

A wonderful cast of characters and a mystery that will keep you on your toes.

Max Karpov is a journalist and novelist who has written for The Washington Post and elsewhere. Max Karpov is the nom de plume of James Lilliefors, whose past fiction writing includes two critically acclaimed geopolitical thrillers, The Leviathan Effect and Viral , as well as the Bowers and Hunter mystery series.