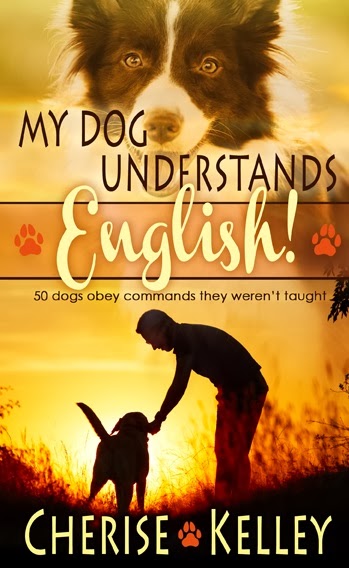 Dogs are smarter than we think.

Has your dog ever surprised you by doing something you said the first time? You are not alone! Here are 50 stories about amazing dogs who understood what their humans said. Some even saved lives in the process!

Chloe the golden Beagle braved a hurricane to obey the new command, "I need Dad, Girl."

Ellie the Coonhound helped her human family escape from an angry bear by obeying the new command, "Get it!"

When her human brother said jokingly, "Maybe Cocoa could dig again and find it," Cocoa did just that!

Our Queensland Heeler mix, Raffle, gave me the idea for this book when he finally but unexpectedly ate some green beans off the kitchen floor after I said, "Oh, so you'll eat grass but you won't eat green beans, eh?"

By the time my eyes fluttered open, Hurricane Elvis was already underway.

The entire house was shaking by the time I woke up. The wind angrily pounded at the window with such force that I was sure it was going to break. I sat up and tried to flip the light on, but the power was out. Terrified, I climbed off the bed and hid between it and the wall. I was still disoriented from just waking up, but I remember vividly not being able to hear anything except the storm. As I sat there though, I heard a noise from outside the room.

Mustering up the courage to pull myself up on my knees, I opened the door just in time to see the living room window shatter as a tree flew through it.

As I watched the storm raging inside the house, I grew worried for my sisters. I called for them, but they didn't answer. I could feel the panic swelling up inside me, taking over. I looked over my shoulder. My dog Chloe was close behind me, and I told her to stay. Then, I began my journey across the living room. The plan was to crawl underneath the tree. I could reach the bedroom that way. As I crossed the living room, the wind pushed up.

Before I knew it, the entertainment center was on top of me, pinning my legs down.

Try as I might, I couldn't move. I now realized the predicament I was in. Thankfully, Chloe hadn't listened when I gave her the command to stay. As soon as I was trapped, Chloe was on her stomach, crawling to me. I looked at her with tears in my eyes, and with a whimper, she nudged me.

I whispered, too scared to speak in my normal tone. "I need Dad, Girl."

That was all I said. I never expected anything to come of it. After all, I had never taught her a command that was anywhere close to this. I was only telling her because it made me feel more comfortable. I was so scared, and hugging and talking to my animal made me feel better. But before I could pull her into my arms, she pulled herself out of my grip and ran back in the direction we had come from.

I closed my eyes, trying to ignore the cold that pressed against my unprotected body. I was rapidly growing numb. I could hear Chloe barking, but faintly so. I didn't realize what she was doing. My dog was getting my dad's attention. Within seconds, he was alerted to the situation and was fighting the storm to get to me. It didn't take much for him to get the window blocked off and the entertainment center off of me. The rest of the storm was waited out quietly.