Blog Tour: What the Lady Wants by @NikaRhone with a #review and #giveaway 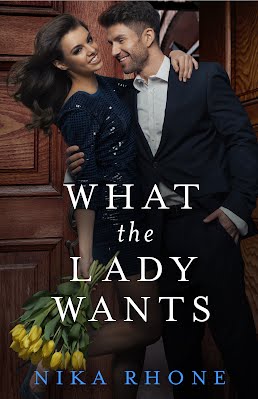 The heiress…
She’d wanted him since she was eighteen. Four years away hasn’t cooled the heat Doyle arouses in her, which means it’s time for Thea to take the former Marine by the horns and open his eyes to everything he’s missing. What will it take to prove that she’s not some untouchable porcelain doll, but a red-blooded woman determined to finally get her man?

The bodyguard…
Honor forced Doyle to consider Thea off-limits. Keeping her that way was proving much more difficult. Every time he turns around she’s there, wreaking havoc on his senses, making him think about long, sweaty nights and how good she would feel wrapped up in his arms. How long could a man be expected to ignore the woman who calls to his every secret desire?

The danger…
But Doyle has a secret that could jeopardize not only the first fragile bonds of love, but Thea’s very life. Will he be able to act before it’s too late for them both?

I liked the fact that we got both past and present. There was a lot of information and you began to understand where both Thea and Doyle were coming from as characters and their motives.

I liked the emotion the author was able to evoke. I liked the stand up man that Doyle was, even though Thea didn't understand his motivations.

I liked their progression once their relationship started to change and they were honest with themselves and each other.

Nika Rhone has been fascinated with storytelling from the moment that first book was placed in her eager little hands, starting a lifelong love affair with the written word.  Eventually, though, reading other people’s stories just wasn’t enough, so she started to write down her own.  The magic of creating brand new worlds and the people who live in them keeps her hard at work thinking up the next set of characters she can torture before giving them their happy ending.  She lives in her hometown on Long Island, New York with the two men in her life: her super-indulgent husband and their outrageously spoiled shelter dog.