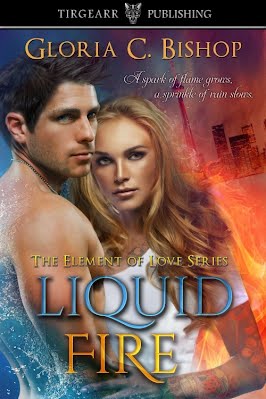 Everyone remembers their childhood as being magical. Lee just found out hers really was.

After suffering a run of bad luck, Lee wants nothing more than to lick the wounds of her past and bury herself away from reality, but she discovers a world of magic, a history she never realized existed. Her destined elementals are being held against their will and the only way to find them is to align with the incredibly delectable, unbelievably stubborn Jeremy. They wind down pathways that will take their undeniable chemistry even higher as they move closer to the sinister plot that has stolen her birthright. Together they will find the villain and learn that sometimes fire and water can mix with steamy, hot results.

A spark of flame glows. A sprinkle of rains slows.

First of all, I just want to start off by saying, HOW HOT is that cover? I love it!

I felt like everything flowed very well and the characters were very easy to become attached to. This is the kind of book that you become engrossed in.

If you are interested in a roller coaster ride with many twists and turns than this is definitely the book for you. There are plenty of times where I said to myself "Whoa, didn't see that coming."

Gloria lives in southwestern Ontario Canada, with her hubby, her two teenage kids and a slightly larger than normal (or believable) cockapoo named Spike.  She was lucky enough to meet the dude of her dreams at a drunken toga party while at college, two days before she turned nighteen, and they’ve been together ever since.  She believes in romance, and that attraction doesn’t have to die off.  It can survive everything from children to middle age drama.  She loves to laugh with her hubby and believes in keeping a sense of humour above everything else.  Gloria has always written, everything from poetry to short stories to a column in a local paper.  Her favorite is to write romance, because everyone deserves that feeling, that belief in a happily ever after.
A child of an extra-large blended family, with two brothers, two sisters, two dads, one mom, one step monster, twelve grandparents and so many aunts uncles and cousins that her hubby after twenty years still can’t keep track of them all.
Being surrounded by that many voices growing up taught her how to block out what she doesn’t want to hear.  To this day that skill has come in very useful, as she gobbles up four books a week. From romance to fantasy even textbooks- nothing stands in her way when she wants to read.
She draws and collects crafts like other women collect shoes (which she also collects but that’s another story).  When she isn’t wearing her hat as mom, wife, writer, sister, artist, daughter, crafter, doggie mommy, friend, she can be found sitting around a campfire with an eclectic group of people.
She is a self professed geek.  Her geekdoms include Buffy the Vampire Slayer (or anything Joss Whedon does), zombies, star wars, the princess bride, game of thrones, the walking dead and so many more that she can’t possibly name them all.
Overall she is a scooter riding, wookie hoodie wearing, fun loving woman who refuses to grow up.