Release Week: BIG by @emmerollins read an #excerpt and enter the #giveaway 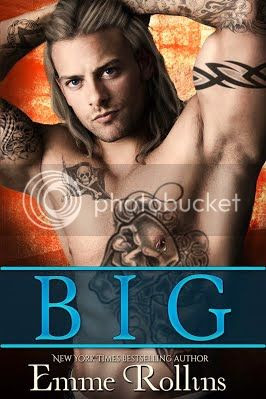 He’s big. He’s bad. And he only wants one thing.
Revenge.
Ric Ryker spent years being called “Big Dick.”
Ridiculed for his weight, shunned by all the pretty girls, snubbed by all the cool guys.
But after a secret journey of transformation, he’s back—ready to take over leadership from his father at Ryker Arms—with an impressive new physique and a plan to prove them all wrong.
Especially her.
The one woman who hurt him the most.
Annalesa—smart, sassy, stunning.
And his stepsister.
The girl he could never have.
The girl who wouldn’t look twice at him anyway—especially in front of her stuck-up friends.
Now he’s going to make her want him.
Show her just what she was missing.
And hurt her, just like she hurt him.
He’s got the weapon and he’s taken aim—but he didn’t count on his own heart getting caught in the crossfire.

“Leesa, I’m still not so sure this is a good idea…” Ric looked down at her, a frown turning the corners of his perfect mouth down just slightly. “I don’t know what to think.”
“Please trust me.” She kissed his chest, rubbing her cheek there, her voice almost a whisper. “I should have tried harder. I should have told you how I felt. I should have been brave then, I know.”
“Oh Leesa.” His lips brushed the top of her head.
“But I wasn’t brave then. And I’m sorry, Ric. I’m so sorry. I’ve been sorry every single day we’ve been apart, every minute that you were out of my reach.”
“Oh Christ.” He sighed.
“But you have to understand something.” She lifted her face and met his eyes, squaring her shoulders. “There are only so many times I can explain, only so many ways I can apologize. I know what happened… it made you feel awful, and I’m sorry you were hurt. But Ric—I never did any of it on purpose. I never, ever set out to hurt you.”
“I know.”
She felt weightless as he lifted her onto the ledge of the booth, feeling the warmth of his palms through the thin cotton of her top as he kept his hands around her waist.
“So you forgive me?” She knew the question was in her eyes as she put her arms around his neck.
“If we do this…” His thumbs stroked her belly, on either side of her navel, a delicious distraction. “I need to trust you. Completely.”
“Okay.” She nodded, her heart soaring at the possibility. She wouldn’t have admitted it to her closest friend or even confessed it to a priest on her death bed before this moment, but this, with Ric, was what she wanted, what she’d always wanted.
“We’ll have to keep it secret.” His thumbs brushed beneath her top, stroking her bare skin. He looked over his shoulder, checking they were alone. “At least, for a while.”
“Yeah.” She winced, not relishing the thought of telling their parents.
“Leesa, I really need to trust you.” His grip tightened, his fingers digging into her sides so hard it almost hurt. He was so strong! “I imagine our relationship’s going to be tested. A lot.”
“I know.” She nodded vigorously, agreeing, the word ‘relationship’ from his mouth secretly thrilling her. “Ric, I promise, I—”
“I mean it. This isn’t a joke. Don’t make promises you can’t keep.” His harsh words jarred her senses but he didn’t let her go. His hands were under her shirt now, fully on her skin, his big palms spreading heat through her whole body. “Because, I may ask you to prove it, Leesa.”
“I will,” she breathed, straightening her spine so she could get her lips closer to his. “I swear, I’ll do whatever I have to, to prove my feelings for you, this time.”
“Good.” He gave her a slow, weary smile, and then he kissed her, his mouth soft and open, not demanding anymore.
“What now?” she breathed as they parted. If he’d wanted to take her right then, right there, she would have done whatever he asked.
“We take it slow.” He rested his forehead against hers. “And keep us a secret.”
“Us.” She smiled at that.
“You up for more target practice?” He smiled, too, glancing down at her gun as he took a step back.
“I’ll probably miss the target entirely.” She grinned, sliding off the ledge and putting her hands to her flushed cheeks. “But it’s probably a good idea for me to cool down a little before we leave.”
Ric helped her relax into her stance and, with the weight of their conflict gone, she went on to make six bullseyes out of ten shots on the next two targets, and the remaining shots clustered close around the center.
“Damn, girl.” Ric clapped. “I’m impressed. Remind me not to give you any reason to shoot at me.”
“You’re the last person I’d want to shoot at.” She smiled and emptied the last cartridges out of the magazine, handing them back to him, along with the gun. “At least, most of the time.”
“Except when I’m being a dick?” He snorted and she laughed as he led them back to the armory to check in their weapons.

Emme Rollins is a NEW YORK TIMES bestselling author of New Adult/Mature Young Adult fiction. She’s been writing since she could hold a crayon and still chews her pen caps to a mangled plastic mess. She did not, however, eat paste as a kid.
She has two degrees, a bachelor’s and a master’s, one of which she’s still paying for, but neither of which she uses out in the “real world,” because when she isn’t writing, she spends her time growing an organic garden to feed her husband and children (and far too many rabbits and deer!) where they live on twenty gorgeous forested acres in rural Michigan.
She loves tending her beehives, keeping up with her daily yoga practice and going for long walks in the woods with her boxer dog, who loves chasing squirrels almost as much as Emme loves writing!
Emme loves hearing from fans, so feel free to use the contact page on her site (emmerollins.com) to connect with her.