Book Blitz: Tell Me You Want Me 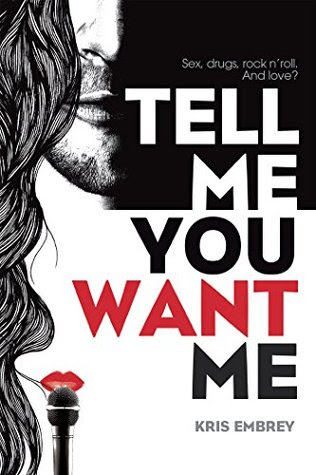 
Nineteen-year-old Gina Kelly is used to working hard for everything in life. Despite her challenges, Gina has dreams and one of them is to become an actor. One day when she sees an ad in Playbill for open auditions, she heads to New York where she surprisingly secures the lead role in a Broadway production. But little does she know that acting on Broadway is just the first step in what is about to become an adventurous new life.
The play is ready to end when Gina’s theatre director introduces her to the manager of one of rock’s biggest bands. He is desperate to find a backup singer before the band goes on tour and Gina is thrilled when he hires her. The chemistry between Gina and lead singer, Sebastian Roland, is instantaneous. Unfortunately, Sebastian is a married, pill-popping addict. As the group sets out on an adventure fueled by sex and drugs, Gina quickly falls in love with Sebastian. But when his drug use escalates, Gina is forced to make a decision with the power to change her future once again.
Tell Me You Want Me shares the tale of a young woman’s journey of self-discovery as she follows her dreams to New York, falls in love, and realizes that she is the only one in charge of her destiny.

Goodreads / Amazon / Barnes & Noble / Kobo
—
EXCERPT:
Chapter 3
Jingle and Belles the Musical
It was audition day, and Bridgette was up and wanted to show me the best way to Times Square. I took her up on the offer. I had no idea where I was going. We headed out and walked forever to midtown as she pointed out to me where all of the cool clubs were near our neighborhood. An hour later, we had arrived to my audition, and Bridgette said she would be waiting for me at Circle Bar inside the Marquis Hotel and to come over when I was finished.
I followed the direction arrows to the auditions, where I was met by a very precocious and impatient handler, who startled me when he said, “Part? What part?”
I replied to his bitchiness, “Candice.”
He looked me over and with a head-spin and snarky tone said, “Left.” Did I just get my tea leaves read? Yes, I believe I did.
Walking inside the theater, I took a seat and waited to be called, but I noticed how quickly people were being dismissed. I overheard a conversation that was taking place directly behind me about the director, Lex Lenord. My fellow actors were hissing that if they had known he was the director of this shit production they would have opted to try out for Pigeon the Musical: The Life of a Lonely Bird. Apparently that must have been some encrypted theater sarcasm because I had never heard of that production, but it was apparent from the conversation taking place that Lex had a reputation of being harsh. Stories were spilling about cast members being pitted against each other and Lex referring to actors as children. Seems Lex was also known for tantrums that included dialogue from films. I thought that might add some color to the rehearsals, and I happened to like overdone tirades; they can prove to be entertaining, if executed well, especially when you’re bored. Lex apparently enjoyed the company of young, pretty boys, full of sass and attitude, as his assistants, as one of my fellow actors was discussing.
Lex’s assistant Carl, who was seated next him, said, “Gloria Smith for the part of Candice, you’re next.”
Lex upon looking at her said, “Thank you, next!”
This guy was tough. That poor girl didn’t even open her mouth. Everything came down to this flamboyant man yelling the word next to me. I was thinking this might be all for nothing and my parents were going to expect me to come home if I didn’t get the part and that was not on my shit-to-do list for the day. As I was pondering all of the scenarios in my head—having some fabulous cocktails tonight in the city or being put back on a plane and sent back home—nerves had taken over when I heard my name called,
“Gina Kelly for the role of Candice,” Carl called out,
I stood up and took a spot directly in front of Lex.
In the back of my mind as I looked at Lex, I said to myself, Fuck home; there is no place like New York and started my lines.
I continued with my audition and noticed the producer of the play leaned into Lex, and they were talking and taking notes, appearing to not be listening. Lex paused me and inquired why I wasn’t auditioning for the role of Belle. I explained to him that I had understudied the role of Candice for the last two years. Lex looked up at me, and very uninterested in what I was saying, he instructed me to take a seat and wait.
“Thank you, sir,” I said, before sitting with the rest of my fellow actors.
Lex made an announcement of the people he wanted to stay for the role of Belle, “Molly Cartwright and Gina Kelly.”
I thought, He must have this mixed up. I didn’t try out for that role.
Molly and I got up and went to face him. I thought to myself, Door number one, we have some lovely cocktails for you, Gina, or will it be door number two? The one-way coach ticket and no cocktails on your way back home to your pathetic life? Which one will it be, Lex?
“Molly Cartwright in the lead of Belle. Gina Kelly, you will understudy Molly,” he said in a very blank tone, and people started clapping.
It wasn’t the applause one might hear at a U2 concert. No, it was more like polite golf claps, but I didn’t care. I had door number one and cocktails coming to me that night. I had managed to secure a nice paycheck in the safety net position of the top spot. Lex informed Molly and me that rehearsals started Wednesday at nine sharp and to call Equity Union office and then go see Hilda in hers.
Lex turned to the others still waiting to audition and said, “Are there any actors left in this city who have any talent?” Lex proceeded to quip that he needed five minutes and wanted to know where the hell Carl was.

Author Bio:
Kris Embrey has had a love of music since she can remember. She studied music engineering and worked for Dick Clark as a runner for his music production company. Her professional career has included working for various television productions such as the American Music Awards and the Academy Awards. This is her first book.