PROMO Blitz: A Killer's Guide to Good Works by @ShelleyCosta 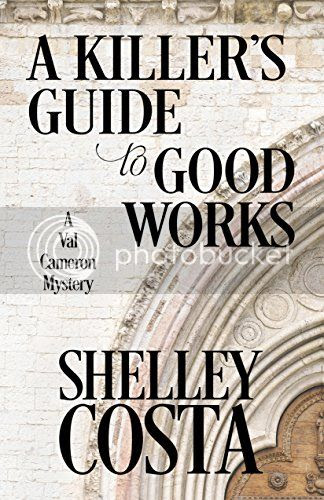 Senior Editor Val Cameron is back at her desk in New York. When her curator best friend returns from an abbey in England, she invites Val to see a priceless relic that has mysteriously found its way into her carry-on.

But by the time Val arrives at the museum, her friend has been murdered -- and the relic is gone.Val soon learns that a young monk at the abbey has also been murdered. What dark purpose is attached to the relic that has led to two murders? When Val discovers her apartment has been broken into, her native New York feels like a place she no longer knows. Now she has to unmask a killer who will stop at nothing to fulfill an ambitious plan-- and Val Cameron is just the latest person to stand in the way.

Praise for A Killer's Guide to Good Works:

“In her second adventure (after Practical Sins for Cold Climates), feisty, intrepid Val balances her publishing and sleuthing lives with verve. Dan Brown fans will enjoy this puzzler.” – Library Journal

“A smart, even sly, tale of relics and rituals, truth and lies, prophecy and forgery that will keep you turning pages late into the night.” — Leslie Budewitz, Agatha Award-Winning Author of the Seattle Spice Shop Mysteries

“A fascinating, if sobering look into the world of stolen antiquities, a black market that makes billions of dollars every year, and that many have indeed killed for.” – For the Love of Books

“In this edgy first in a new cozy series from Costa, Val Cameron, a senior editor at a New York publishing company, travels to the tiny town of Wendaban, Ontario…A strong plot and engaging characters make for a well-crafted mystery, and Val’s humorous attempts to cope with the wilderness do much to lighten the tension. The core of the story is Val’s discovery of her own self-worth.” – Publishers Weekly (on Practical Sins for Cold Climates)

“If you want to read a beautifully written story with a twisting and turning plot, this book is for you. Five stars out of five.” – Examiner.com (on Practical Sins for Cold Climates)

Other Books in the Val Cameron Mystery Series:

When Val Cameron, a Senior Editor with a New York publishing company, is sent to the Canadian Northwoods to sign a reclusive bestselling author or risk losing her job, she is definitely out of her element. Val is certain she can convince Charles Cable, but first she has to find him.

Aided by a float plane pilot whose wife was killed two years ago in a case gone cold, Val’s hunt for the recluse becomes even more muddled. When all signs point to Cable as the killer, she must work to clear his name before the scandal sinks her career.

Trapped in a wilderness lake community where livelihoods collide and a killer lurks, the prospect of running into a bear could be the least of Val’s problems.

“A strong plot and engaging characters make for a well-crafted mystery, and Val’s humorous attempts to cope with the wilderness do much to lighten the tension. The core of the story is Val’s discovery of her own self-worth.” – Publishers Weekly

“Costa hits all the right notes—vulnerable but likable characters, a compelling plot, a clearly drawn setting, and a tangled web of past and present events.” – Sheila Connolly, New York Times Bestselling Author of A Gala Event

“Taut, well written and suspenseful, Practical Sins for Cold Climates draws readers into a community where the past haunts the present and residents’ motives are buried deep...just like the truth.” – Kylie Logan, Author of And Then There Were Nuns

“What a terrific surprise! Shelley Costa is a contender… a terrific book in which to bury oneself on a long, cold weekend. Not a bad beach read, either for that matter. Just buy it. Just read it.” – Seattle Book Mama

“Very well-written…this book reads as longer than typical cozies because it needs to, for honest character evolution. The mystery has a very satisfying conclusion…This is the first book I have read by Shelley Costa, and I am very impressed.” – Librarian at Jefferson-Madison Regional Library System

A 2004 Edgar nominee for Best Short Story, Shelley Costa is the author of A Killer’s Guide to Good Works, Practical Sins for Cold Climates, You Cannoli Die Once (Agatha Award nominee for Best First Novel) and Basil Instinct. Shelley’s mystery stories have appeared in Alfred Hitchcock Mystery Magazine, Blood on Their Hands,The World’s Finest Mystery and Crime Stories, and Crimewave (UK).  She teaches fiction writing at the Cleveland Institute of Art.