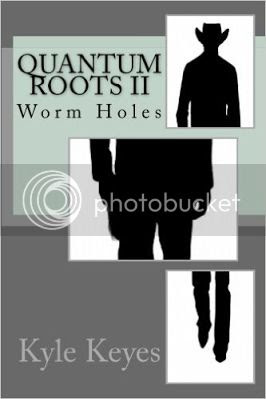 In this sequel to Quantum Roots, the meekish Olan Chapman faces danger as vigilante Samuel Leroy McCoy, a US deputy marshal who upheld law and order in 1876, Dodge City.

The metamorphous holds an eerie transformation, cloaked with rolling sagebrush and horse whinnies from yesteryear, which causes DPA Director, Alexis Grumman to rethink the validity of worm holes.

"Creation is a worm hole," replies Dr Norman Daly, "Atoms require hadrons to form a nucleus, and each hadron comes through it's own worm hole. Two quarks form the bi-dimensional plane needed to support the hole. The remaining quark squeezes through this hole, after which the first two quarks follow to shape the hadron to a given genetic, configuration. The hole then closes to divide time from timeless."

The gunfighter is wanted for multiple killings, a consequence that keeps the slender computer wizard on the run from authorities - and domineering wife, Ivy Chapman.

Federal agents, Alexis Grumman and Jeremy Wade track down a current day vigilante, whose fingerprints match those of a Korean War veteran. Author Kyle Keyes uses characters from two previous novels, to promote a theory that particle energy formats with a quantum root system, that can bypass time and space. Keyes believes that such fiction could turn to fact as we move into the age of quantum mechanics. Adventure fans everywhere should delight in this fast paced action story, that brings yesterday's gun play back to settle cyber-age injustice. Synopsis: Jesse Joe Jacks was born sometime during the snow blizzard of 1923. The Lower Elk County, game warden died from a lightning strike on July 23, 1959, while wearing a sheriff's star. Olan Chapman came to life in August of 1974 and found a computer career with a center city, electronics firm. Chapman drinks heavy and is haunted by flashbacks of an older sister, lost to an unsolved case of gang rape and murder. Jacks loved nature and lived to protect wildlife. He stood tall and fought to uphold justice. Jacks was also a crack shot with a firearm - any firearm. Chapman attends the theatre, plays piano and at one time led a march against the National Rifle Association. Both men have the same fingerprints, much to the chagrin of Lt General Alexis Grumman who heads the federal department for para-normal activities. Working with special agent, Jeremy Wade, Grumman breaks open the case when Chapman's fingerprints also match those of the vigilante.

Buy it From Amazon 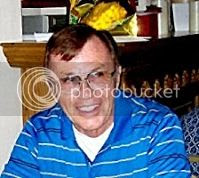 Older Americans often come from whistle stop towns painted by Norman Rockwell. Kyle Keyes grew up in Clayton, a South Jersey borough first founded as Fislerville.  Clayton had a small urban district with street lights, but no indoor plumbing. Farmland and outhouses were a sign of the times.

Clayton was so small, that Keye's aunt doubled as his Sixth Grade school teacher, who once said that Kyle lived with his nose between the bookends. She must have known something.

Keyes went to Temple Tech for concrete and steel design in 1956 and 1957. He never became an engineer, but still has a red, tinker toy motor and his World War II, Erector Set.

The early Sixties found Kyle in the U.S. Army where his top sergeant would daily bark, "You just say morning, trooper. I'll decide if it's good or not!"

Keyes wholesaled bakery products to food chains for thirty years,and wrote odd items for local newspapers. He is widowed and currently lives in Florida. He has two children, Kathleen and Daniel. Grand children are now grown and too old for tales about railroads and yesterday's America. This leaves Keyes no option but to write books.

PS: Should you need a book autographed, Kyle can usually be found rooting through neighborhood trash cans, one block ahead of the recycle truck.