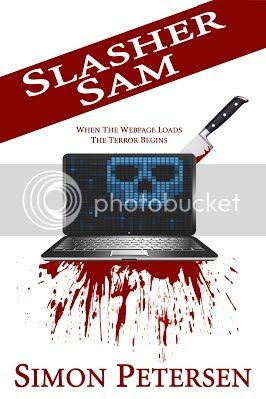 Beware: this book is not for the faint of heart, the weak of stomach, or the soft of bowels. In these pages are the blog entries of one of the most depraved serial killers of the 21st century—Slasher Sam.

Taking inspiration from several generations of horror films, Sam guts countless victims in creative ways, and posts these exploits to SlasherSam.com for the world to see, putting readers so close to the action that they’re practically in the splash zone when the blood goes flying.

And is there ever blood—Sam’s a savvy killer, too well-versed in horror film lore to make rookie mistakes, which is why the kill count scores well into the double digits.

Visit www.SlasherSam.com if you dare, just remember: in cyberspace, everyone can hear you scream...

A snap of a twig, a rustle of leaves, her head spins around in fright.
“Who’s there?” she says. “Randy, is that you?”
Silly girl. She’s just signed her own death warrant—as if she hadn’t already when I caught her and her boyfriend smoking weed a few moments ago. I’ve been stalking these two for about half an hour, and now he’s gone off to piss somewhere and she’s about to be offed in the opening scene.
To be fair, she’s exactly the sort of girl you hate to see get killed off so early in a slasher movie. Long blonde hair pours out of a red beanie, framing a face so pretty it could sell moisturiser. A tight white puffer jacket hugs her fantastic figure, and skinny jeans accentuate her long legs and ample ass.
I think I’m in love. But rules are rules. I don’t make them; I just enforce them, and she’s going to die tonight.
“It’s not funny anymore, Randy. I mean it. Quit clowning around and get back here right now. I’m really scared.”
I fight the urge to call back, “You should be.” Instead, the rustle of the bush is her only answer as I move out from my hiding place behind a large evergreen and walk back to the well-worn hiking trail where she’s standing, flaring her flashlight in all directions for any sign of her loser boyfriend.
When she sees me, her eyes grow so wide that it’s comical. Rendered immobile by fright, we both just stand and look at each other for a moment or two—her on the verge of a nervous breakdown, me on the verge of killing her. The tension between us is so thick that you could cut it with my machete. I try. What I cut instead is her head open.
It’s like one of Thomas Savini’s finest special effects, but, oddly, less messy. Blood and brain matter abound, of course, but it’s really more like piercing a coconut than splitting an overripe melon. Either way, the blade makes a satisfyingly heavy thunk sound as it punctures the cerebrum, ensuring that she’ll never get to learn French, read another book, or do anything ever again.
When I pull the machete out of her skull, she plummets like the quality of the Friday the 13th film franchise after Part VII: The New Blood. But I don’t have time to dwell on the disappointing Jason Takes Manhattan or the frankly unwatchable Jason Goes to Hell right now; I shouldn’t have even brought them up, because I’ve got a boyfriend to kill. He’s not my boyfriend, asshole. I mean the boyfriend of the girl I just killed. He’ll be back here at any moment.
Propping the girl up against a nearby tree, I pull the hood of her coat up over her bloody beanie and the gaping wound in her head. Even in death, she’s lovely. Now it looks like she’s just having a wee rest. Well, if you’re stoned or stupid anyway.
Fortunately, the boyfriend is a potent mixture of both. I hear him tearing through the jungle and spouting inane babble and sexual innuendo long before I see him from my hiding place in the black forest, opposite the sleeping dead girl.
“Hey babe, I just saw a really big snake,” he says while he’s still out of view. “Oh wait, it was only my penis. False alarm.” He laughs at his own lame joke. “I’m really horny. We should fuck again, if you’re interested. Seriously, you don’t have a choice, let’s do it.”
Wait, didn’t she call this guy Randy a minute ago? That’s a bit on the nose, don’t you think? It’s like a guy called Bob who can’t swim well, a dick called Richard, or if the parents of that blowhard politician who wants to build a wall to keep the Mexicans out and likes wearing a bad toupee had christened him ‘Racist Asshole’.
When I finally get a visual on this walking-talking meat puppet, he’s strutting up the track like a man relieved. Dressed in a black puffer jacket and a trucker cap—in spite of the fact that it’s the middle of the Goddamn night—he proudly wears a shit-eating grin through a stubbly beard like he won it in a contest. I just can’t wait to end him.
“You sleeping babe?” he says, bending over the resting corpse of his dead girlfriend. “Come on, rise and shine sleepyhead. I’m horny.” When she doesn’t reply, he shakes her. “Come on babe, I’m not kidding around. You need to wake up right now.”
Frustrated, he gives her a short, sharp shove and she flops over.
Impatience vanishes and terror takes control now. Whimpering like a sad puppy whose owners have abandoned it next to a busy highway, he slowly peels back her hood to see exactly the sort of damage that a sharp machete will render to a person’s forehead. He lets out a prodigious scream that’ll continue to ring in my ears a number of hours later, and then flurries around in fright when he feels a soft tap on his shoulder.
It’s me, lumbering behind him in my very best Jason Voorhees impression.
Shock, horror and frank disbelief are plastered all over Randy’s terrified face; for all intents and purposes he is face to face right now with the hockey mask-wearing psycho from the Friday the 13th series. What do you do in that situation? What do you even say?
“What the actual fu—”
But I guess we’ll never know his final words, because I cut him off mid-sentence with a swing of my machete and punt his head away like a soccer ball. 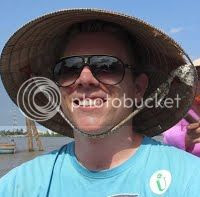 Simon Petersen is an experienced journalist and popular blogger from Auckland, New Zealand. By day he writes about craft beer, world travel, and professional sport; by night he dreams up horror movie scenarios that’d scare the striped sweater off Freddy Krueger. Visit him at www.SlasherSam.com.