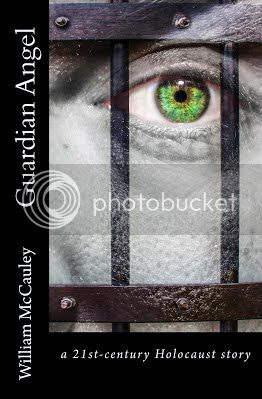 Markus Simmons, a 13-year-old 8th-grader, wants to hang with the cool kids. When his social studies class begins a Holocaust project, some A-listers befriend him to get him to work with them so they can have access to his Oma, who was in Auschwitz, and he discovers that there are Holocaust deniers in the world, one of whom is in his class. Then someone identifies his Oma as having played a criminal role during the Holocaust, and he has to reconcile his love for his grandmother, his desire to work with the cool kids, and his anger at the deniers and the others who attack his grandmother.

This novel is deep and thought provoking. It is young adult but is very emotional and has a strong tie to Historic events.
There are an abundance of great themes throughout this novel and it is a very powerful read. This novel was quite brutal in its honesty.

I liked the way the author showed how some of the themes from back in that horrible time are still present today.

That being said, there is a light hope that manages to shine through.

One thing I noticed with this novel is that the beginning and even middle was a bit slower moving than the end. I wish that the pace would have been a little bit more even throughout.

William McCauley was born and grew up in the Northern Virginia suburbs of Washington, DC, in a delightful little town called Vienna. His B.A. in German and M.A. in English are from George Mason University, and at the ripe old age of 29, he "ran away from home" to do doctoral work in linguistics at the University of Colorado in Boulder. After two years, his Wanderlust attacked again, and he trekked on down to Miami, FL, where he did more doctoral work at the University of Miami. Then the powers that be at The German School Washington, where he had taught English for six years, tracked him down and asked him to come back. That brought him back to the DC area, where he taught at the German School for another eighteen years. He finished his career in education at the end of school year 14-15, retiring after ten years as a Gifted and Talented Education specialist with Howard County Public Schools in Maryland. Now all he wants to do is write – and read.