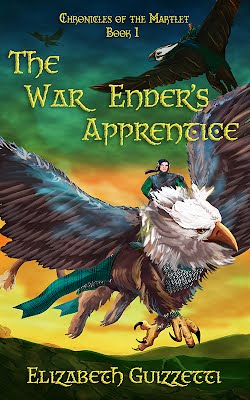 In the chaotic universe, many intelligent species are on the brink of war, but the Guild holds the violence at bay to foster peaceful trade. The most renowned War Ender is Lady Alana of House Eyreid. Alana hopes to train her beloved nephew, Roark, in her vocation.

It was supposed to be a simple training mission aboard an Interrealm slave ship. However, when Alana find her people enslaved, she murders the crew and rescues every slave—whether criminal, dishonored, or stolen. A fleeting vision of Roark's future tells her to offer the newly freed Eohan a War Ender’s education.

For her vision to come true, Alana must rescue Eohan’s young brother who was sold in the last port and lost somewhere in the Realms, but first, they have a war to end.

I loved the descriptive way this novel was written. It really submerges the reader into the world.
There were a lot of moving a parts to this one and I really liked the originality that Guizzetti brought.
This novel was very vivid in the descriptions, the writing really jumped off the pages and into my mind, so kudos to her for that.

Much to her chagrin, Elizabeth Guizzetti discovered she was not a cyborg and growing up to be an otter would be impractical, so she began writing stories. Guizzetti currently lives in Seattle with her husband and two dogs. When not writing, she loves hiking and birdwatching.

She is the author and illustrator of independent comics: Faminelands and Lure and Out for Souls&Cookies! Her debut novel, Other Systems, was a 2015 Finalist for the Canopus Award for excellence in Interstellar Fiction. She continues to write science fiction, horror, and fantasy novels. Chronicles of the Martlet is her first novella series.