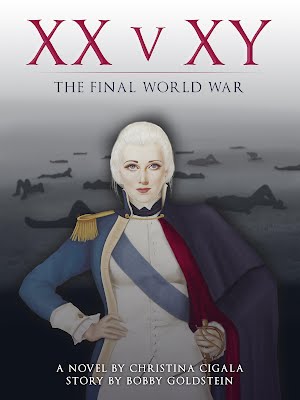 The Gender Wars won’t be fought with machines—they’ll be fought with people. And when the women of West America wage war with men in the East, it’ll be anything but unimaginative.

In East America, the most fertile women go through excruciating body- and mind-altering training until their identities satisfy that of the State. They are the “Nancys”—white hair, light eyes, and no way to differentiate themselves from their identical “sisters.” Nancy159 is fifteen. She’s auditioning to be the seventh wife of President X, the ruler of the Eastern States. If she wins, she’ll be married to the most powerful man in the world; if she loses, she’ll die.

Avis Baron is the daughter of the Luminary of West America. Recently, she stopped
taking her Amplexus pill, taken by all woman in W.A. to control their emotions. It turns
out there’s a lot she didn’t know a person could feel—especially the way she’s feeling
about her friend Ethan.

The world continues to collapse and the Gender Wars loom on the horizon…XX v. XY.


The writing was superb and the attention to detail was part of the reason everything seemed so real. Kudo's to Christina Cigala for weaving a brilliant tale in which she uses vivid descriptions to capture the reader and bring them into her world.

Cigala  manages to take the reader through a barrage of other emotions besides the typical and they will find themselves submerged in the world and feeling every single things that happens to these characters.

The author is able to unfold the plot believably while stringing readers along. The characters are well developed and easy to invest in.

Christina Cigala is a writer and producer residing in the wilds of Los Angeles. She writes and produces television for MTV, Fox, Syfy, Speed Channel, HGTV, VH1, Spike, and TruTV. As a playwright, her work has been widely produced in regional theaters, New York, and LA. She has an MFA in Playwriting from the Actors Studio Drama School in New York and a BA from Baylor University.

Bobby Goldstein is the president of Bobby Goldstein Productions and the creator of Cheaters, one of the longest-running syndicated shows in history, now airing daily in 215 U. S. markets and in over 100 foreign countries. Goldstein has become recognized for his ability to spot cultural trends and capitalize on rebellious ideas.