Blitz: Reclaimed - #romance novel from @marcella_swann read an #excerpt and enter the #giveaway 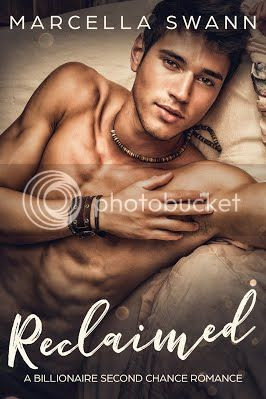 Beyond all else, Samira Foster wanted one thing: Elliot Dowling. He was her passion, her need. They were just kids but she knew it was real. The way he kissed her; the way he held her. Yet he’s the one thing that was denied her. The scion of a powerful and wealthy family, she’s now the head of Foster Acquisitions. But she doesn’t have it all. The pressure, the demands, the wolves. And she’s all alone. She needs someone. She needs him. And she’ll have him … even if it destroys her.

Elliot slowly began to realize that, despite the adrenaline flooding his system, nothing had truly changed since he had walked away years ago. He had to fight not to reminisce of the days they spent together, whether it was at the park, the lake or hiking the trails while the world waited back in the city. She was still the perfect girl, and now woman, that every man dreamed of, and he knew that she had no business slumming it with the likes of him. Samira’s eyes started to glow in the same way they used to when she looked at him. She could see deep into his soul, all of his feelings, and right now he wondered if she knew the truth.

“I almost gave up hope trying to find you,” she said. “It’s been years since you disappeared. I was beginning to think I would never see you again. Then the name Dowling Holdings came across my desk and I heard you’d returned. Why didn’t you reach out to me?”

“I thought about it, but there’s things…”

“I know.” Samira nodded. Her smile faded slightly, but she suppressed the frustration that Elliot knew she must’ve been feeling. “I had my investigators do a complete work up on Dowling Holdings. The only thing they can’t tell me is why you left. Was it because of what your father did?”

Elliot shook his head, he was certain there were things no one could know, and truthfully said, “My father’s actions might have held something over me at one point, but that doesn’t shadow my decisions anymore.”

Samira looked confused, then sad for a split second. “Was it me? Did you not reach out because of something that I did?”

He watched something click in her head, and even though he had never told her what happened that night, she figured it out.

“It was my dad then,” she said. “He never approved of us; even if he never told me, I knew that he hated the thought of us together. Did he threaten you? Forbid you from seeing me?”

Elliot could not look at her. Samira’s face flushed with anger as she continued, “Two and a half billion dollars in profit last year from a holding company that you built yourself. If you can’t see how impressive that is, I would be shocked! That was your hard work and determination! If my dad was even alive, he would not have a leg to stand on to keep us apart.”

“Sam, I wanted everything to be just right, or at least, cleaned up…”

Samira stood up. “No, Elliot. I don’t believe you. Everything you’ve gone through, everything you’ve built, doesn’t matter. You’ve let him stand between us for all these years. He was my father, and no matter what he said, I was never afraid of him or let him run my life. You could have everything you want now, but instead you just keep trying to prove yourself to a dead man.”

Samira got up, clearly upset, and headed for the door.

Every part of him wanted to run after her, and take her into his arms again, but where would they go from here? He saw now how crazy it was to bring her back into his dark world again.

Marcella Swann has been putting words on paper for as long as she can remember. After working for years in the hard-edged world of journalism, she now devotes her time to writing contemporary romance stories of strong-willed women who win the men of their desires.

As passionate about love as the beauty of a story well told, Marcella is a complete romantic and believes everyone desires their happily ever after.

A small-town girl from Louisiana, Marcella now lives in New York City and starts each day walking her Yorkie in the park. She also swings a mean kettle bell at the gym and loves Karaoke nights with her friends.