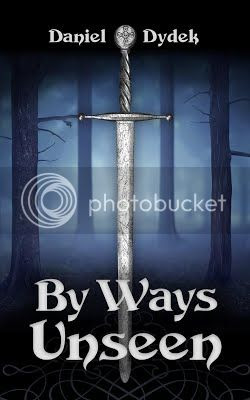 The Provinces are falling. From the south, the immortal Knights of Galessern raid. From the north, the trees of the Kalen Woods have awoken, and are hungry for their second city. And from the east, Haydren Loren flees a childhood bully whose hate is now fully grown, and capable of murdering his way to becoming the Earl.

Haydren might find safety in the west. Or, he may find himself suddenly forced on a suicidal mission: face and defeat Lasserain, the strongest mage history has ever seen.

His quest is joined by a medley of friends foolish enough to think they might succeed: Geoffrey, a former knight of Rinc Na who betrayed his country and friends, and now seeks forgiveness through this final, desperate act; Sarah, a sorceress who will do anything to prove she is worthy; and Pladt, the famed archer whose only wish is to travel as far and wide as his name.

The God of All only knows the ways they must go - He, and a voice in Haydren’s head that is constantly growing louder.

Insanity. Capture. Death. All roads seem doomed for failure. But they must quickly choose a path, for Lasserain’s full fury is descending, and no one else has been able to stop it.

Daniel Dydek has written a descriptive novel that does a great job of pulling the reader into the world he has created.

The flow of the novel was well executed and everything as far as pacing went felt smooth.

I enjoyed getting to know the characters both primary and secondary. They all felt like they had their own purpose and had depth that made me care about them.

Daniel Dydek was born in Raccoon Township, PA, where he dreamed of living out west. So far, he’s made it to Ohio, where he lives with his wife. He began writing at age 8, and never really stopped. After three years with the US Army, he went to get his Bachelor’s degree in English Writing from Geneva College of Beaver Falls PA, and is currently finishing up a Master’s degree in Natural Resources from Virginia Tech. Besides writing, he also enjoys mountain biking, reading, coffee shops, book stores, and Durango Colorado.