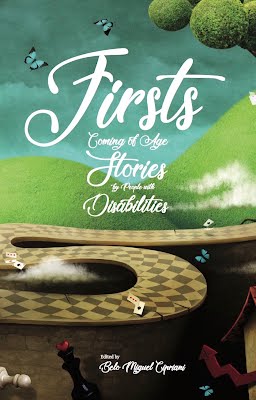 Take a step back in time with some of the best writers with disabilities as they recount their first adventure, their first heartbreak, and the first time the unexpected treaded into their life. From body transformations to social setbacks, to love affairs and family trauma, Firsts collects the most thought-provoking and exciting stories of our time by people with disabilities. Contributors include Nigel David Kelly, Kimberly Gerry-Tucker, Caitlin Hernandez, Andrew Gurza, and David-Elijah Nahmod

This was a read that I was not expecting to understand as well as I did. I loved the inside look we got. I liked the way this collection was put together and the way each persons words shined through in their unique testaments. It deals with so many different aspects of life from the perspective of those with different disabilities. It's a great collection.

Belo Miguel Cipriani is a columnist with the Bay Area Reporter. In 2017, his column on disability issues was recognized by the National Center on Disability and Journalism at the Walter Cronkite School of Journalism at Arizona State University.
He is the author of Blind: A Memoir (2011), which received an Honorable Mention for Best Nonfiction Book by the 2011 Rainbow Awards, and an Honorable Mention for Best Culture Book by the 2012 Eric Hoffer Awards.
He has received fellowships from Lambda Literary and Yaddo, and was the first blind writer to attend the Bread Loaf Writers’ Conference. Cipriani has guest lectured at Yale University, University of San Francisco, and University of Wisconsin at Whitewater, and was the Writer-in-Residence at Holy Names University from 2012 to 2016.
His writing has appeared in several publications, including the Seattle Post-Intelligencer, San Francisco Chronicle, Houston Chronicle, San Antonio Express-News, Business Insider, and HuffPost. He was a contributor to the Ed Baxter Morning Show on iHeart Radio, and was also a frequent commentator on San Francisco’s KGO Radio, as well as on several NPR shows.
Cipriani has received numerous awards for his disability advocacy work, including being named “Best Disability Advocate” by SF Weekly (2015), an “Agent of Change” by HuffPost (2015), and an “ABC7 Star” by KGO-TV (2016). He was also honored as the first blind Grand Marshal at San Francisco’s 45th Annual Gay Pride Parade.
He currently works at the Center for Academic Excellence at Metropolitan State University in St. Paul, MN, where he helps students improve their writing skills.

a Rafflecopter giveaway
Posted by R.K. Emery at 7:44 AM