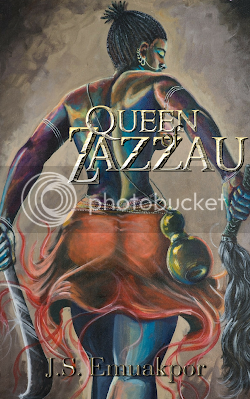 Amina is heir apparent to the throne of Zazzau and must prove she is worthy of the crown. As foreign invaders close in on them, she is all that stands between her people and destruction. Caught in a web of prophecies, she must defend Zazzau, but cannot do so if she wants to prevent the future that was foretold. She did not seek war yet it finds her. Unwilling to be the plaything of gods or men and determined to take control of her own destiny, she tracks down the god of war himself. But has her destiny already been written? Can she choose her own fate? And can she protect her kingdom, no matter what price she must ultimately pay? Because, gods always want something in return.

Queen of Zazzau is an Historical Fantasy that takes place in precolonial West Africa.  It chronicles the life of one of the most famous W. African queens, Amina of Zazzau (or Zaria). At 139,000 words, the novel features several W. African historical figures and a pantheon of W. African gods. The story is told in first-person and gives the reader an intimate look at some of the lifestyles and cultures--many of which are still alive today--of medieval W. Africa.

The plot flowed nicely and the action kept me guessing and flipping pages. What a clever story.

J.S. Emuakpor has created a novel in which the main character shows growth. For me that is always something I look for in my favorite main characters. I liked flawed characters and if they can overcome things, it really speaks to me.

This was a quick read for me. I felt like the words and plot just flowed long effortlessly. I found myself flipping page after page, laughing, and guessing the whole time.

J.S. Emuakpor was born and raised in West Africa. She is a married mother of four, a scientist, and owner of Afrocentric Books. She currently lives in North Carolina and is very much allergic to it. Most of her writing draws upon the spiritual beliefs of the ancestors who frequently whisper in her ear and on the superstitions that she refuses to relinquish.