It exists in a long-forgotten corner of the American dream.

Green Valley County is home to murders and heroes, ghosts and jinxes, gods, devils, and even a pygmy Big Foot.

But the biggest menace is Jinx Jenkins and the string of bad luck he bestows upon the townsfolk.

Can the good people of Green Valley overcome this one man’s curse?

If you love the classic comic and magical realism, you’ll lose yourself in this piece of Americana.

Become a citizen of the City by the Shore and see how seemingly random occurrences come to shape an entire civilization.

Once, a poor, old woman lived in the foothills of Green Valley. Made old by the circumstances of her life. Mary Foster was known the county over as The Human Incubator, as she had been pregnant for the last 257 months.

Her pregnancy went as any pregnancy might. She received regular ultrasounds, took vitamins, and kept away from cigarettes and alcohol—save the occasional glass of wine.

Everything appeared to be right on schedule until her due date. Yet the baby never came. The doctors told her to be patient because these things sometimes happen.

But the baby never came. When seven days passed without any change, the doctors decided to induce. To their surprise, the child held tight. The only course of action was to retrieve the child through C-section. The doctors put Mary under and sliced her open. The lead surgeon put his hands inside and was shocked to feel a bite.

A tiny hand came out and extended a middle finger.

The doctors had a single option: sew Mary back up. The child did not wish to be born. And so, the baby never came.

Holidays passed, children grew tall and strong, and Mary remained pregnant. Her life was thrown out of whack. And as the months and years ticked by and the child inside her grew, she found herself incapacitated. Soon, the burden grew too large for her to walk, and she needed to be wheeled around. Her diet changed, as did her bathroom schedule. She sold all of her normal clothes and spent a fortune on muumuus—the only thing that fit her belly. But worst of all, consumed with pain, she hardly attained a few hours of broken sleep each night. Mary was forced to move in to a nursing home where they tended to her needs.

The father was a one-night stand, a passing traveler on his way out west. She’d never got his name, let alone a number to reach him, but he might as well have not existed at all. Nonetheless, Mary habitually pictured and cursed his face. After a while, though, even his face faded, and she was left with a melting pot of emotions. Hatred and fear and anxiety and discomfort and frustration and happiness and love and lots and lots of pain.

At first, she referred to the baby as It. But after a while, Mary saw fit to give the child a name, so she called him Junior.

Junior aged within Mary, siphoning away her youth. Middle age brought her liver spots and wrinkles. Her skin grew thin and her eyes weary.

Hope had left her.

When the last drop of life was suckled and nothing was left for Junior to reap, the baby finally came. Fully grown with teeth and hair and a beard, Mary awoke one morning to find Junior at the foot of her bed. Despite his appearance, he had the mental capacity of an infant.

Mary spoon-fed him, scooping up the spittle and shoveling it back into his man-sized mouth. She changed his diapers and clothes and even gave him baths. And in spite of all her newfound hardship, Mary had never been so happy.

At last, she was able to stand and walk on her own—a thing she’d dreamt of whenever she did sleep. She could drink alcohol again. And although she never smoked cigarettes before, she started up, just because she could.

She had her body back.

Junior relied on his mother for everything. She cooked and cleaned and earned the money despite his fully capable body. For he was naïve to the ways of the world and, like any child, assumed all the world to be his juvenile right.

One day, old and withered and drained, Mary grew ill. She needed Junior to take care of her.

The man pouted and kicked and cried and cursed.

Dishes piled high, and clothes grew in heaps, soiled and stained. An odor fell about the place so foul, not even Junior could deny it.

At last, he realized the weight he must bear, so Junior picked up a spoon and fed his mother the way she once did for him.

He ventured out into the world and discovered, ever so harshly, that the world was not immediately his. Rather, it was up to him to earn his way and stake his claim. He found work, and in time, an appreciation for his mother took hold. Resentment gone, he realized Mary, with all her hardship, always did the best she could. And wasn’t that all anyone could ever ask?

The day came when Mary finally died, old and gray with a smile on her face and Junior at her side. 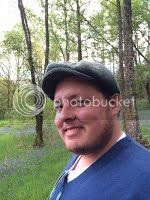 J. Ryan Sommers has an MFA in creative writing from Columbia College Chicago. He and his wife recently left the windy city and relocated to Houston where Sommers teaches and continues to write. Sommers has been writing stories since he was a kid. He found it to be an escape at one of the most difficult times of his life, his childhood.