Celebrating the Book that Reignited My Passion for Writing
“Carolyn Arnold…continues the trend of writing exciting stories that keep your attention throughout…Life Sentence is a thriller all the way…Arnold never disappoints.”
–The Reading Café


“Tell me a story.”Those are the words a coworker spoke to me in the summer of 2006. Little did she or I know that those four simple words would start my writing career.

To give you a little more insight, I used to write as a teenager, but at the point she said this, I was in my thirties. I had been away from writing for thirteen years! See, life had swept me along. I graduated from high school, found love, got married, and moved four hours away from my hometown. Even though, I thought it would be quite the accomplishment to write a full-length novel, I was still overwhelmed by the number of words I’d have to write to reach that goal.

But when that coworker emailed me to tell her a story, I found that I easily keyed a few paragraphs and fired them back to her. I didn’t even give the words any thought, I just let the story introduction flow out of me. A few minutes later, she had emailed again. “More,” she said. So I complied, expanding on what I had written before. We went back and forth like this a few times until she finally told me I had to finish the story.

And, as it turns out, I rose to the challenge. What had started off as a harmless “tell me a story” became my first full-length novel—Life Sentence. It took me a year to write that first draft, but I had done it! But I had accomplished even more than writing a novel. I had found my true passion in life again: writing. There have been very few days since 2006 that my life hasn’t consisted of writing, editing, or reading. My life is full of purpose and gratitude, and I will continue to tell stories as long as I can. 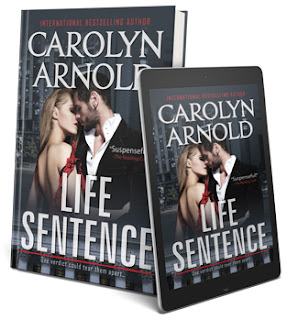 Book Overview:A defense attorney’s worst nightmare…“If I pay with my life, you will pay with yours.”

Defense Attorney Bryan Lexan may have just taken on the case which will cost him his life. When his client, a Russian mafia boss, is convicted of first-degree murder, he vows to make Bryan pay.

Meanwhile, Jessica Pratt has always prided herself on being a modern woman–you know, the kind who doesn't need a man to make her feel complete. So when she finds herself torn between two, she realizes that not all decisions are based on facts. If they were, her boyfriend, Bryan, would be the logical choice. He has the family name, wealth, and a stake in a successful law firm. Only thing is, when she meets Mason Freeman, the chemistry between them is irrefutable and he won't take no for an answer.

With both of them caught up in a struggle for survival, and a powerful enemy on their heels, they'll need to decide where their loyalties lie.


This book will make you want to cuddle up for a while and get lost in the story and mystery that Carolyn Arnold has created.

Detective Madison Knight is such a great main character, she is the perfect person to carry a series like this.

I love that each of these books deal with the same world and some of the same main characters, but each of the premises are unique and very well executed.

Don't miss this one!


About the Detective Madison Knight series:Murder. Investigation. The pursuit of justice. Do you love trying to figure out whodunit? How about investigating alongside police detectives from the crime scene to the forensics lab and everywhere in between? Do you love a strong female lead? Then I invite you to meet Detective Madison Knight as she solves murders with her male partner, utilizing good old-fashioned investigative work aided by modern technology.

About the Author Carolyn Arnold is an international bestselling and award-winning author, as well as a speaker, teacher, and inspirational mentor. She has four continuing fiction series and has written nearly thirty books. Both her female detective and FBI profiler series have been praised by those in law enforcement as being accurate and entertaining, leading her to adopt the trademark, POLICE PROCEDURALS RESPECTED BY LAW ENFORCEMENT™.

And don’t forget to sign up for her newsletter for up-to-date information on release and special offers at http://carolynarnold.net/newsletters.