PROMO Blitz: An Irruption of Owls by @saraleetucker #excerpt #giveaway 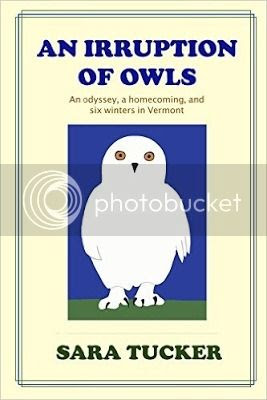 An odyssey, a homecoming, and six winters in Vermont.

A mysterious illness is the catalyst for this story about a daughter’s homecoming. Part of a family saga that takes place on three continents.

In picking up where OUR HOUSE IN ARUSHA (ISBN: 978-1456585440) left off, AN IRRUPTION OF OWLS views from the perspective of small-town New England the forces that shape the family's lives.

The year is 2007, and the Texiers—Patrick, Sara, and nineteen-year-old Thomas—have left their home in Tanzania. They are biding their time in a New Jersey suburb, pondering their next move, when a family crisis spurs them to action. Idora Tucker, Sara’s mother, is suddenly unable to live alone. Something is very wrong, and nobody on her rapidly expanding medical team can figure it out. Within weeks, Sara has moved back into her childhood bedroom, Thomas has enrolled at a school in Prague, and Patrick has become the only French safari guide in recent memory to take up residence in Randolph, Vermont.

My mother, a cautious person, knew about the dangers of falling. She was a doctor’s wife, she had read the statistics, and she had buried one of the fallen—her father, who pitched headfirst off the back porch at the age of ninety-three, landing in a heap on the
asphalt drive. Grampa died in a coma a few weeks later, and my mother went on high alert for the next twenty-five years. At age eighty-six, she had ice grippers for her shoes, handrails in strategic places, and a necklace with a button that would send an SOS signal if worse came to worse. One of the handrails was in the spot where Grampa had taken his fatal plunge; another was on the stairs to the basement. Nothing short of an earthquake was going to disturb her equilibrium.

If, despite her precautions, she were to fall and break a hip, I was not to worry, because she had a plan for that, too: “Just put me in a nursing home,” she said. “Promise me. I’m telling you now, in case I lose my marbles.”

This advice—it was really more of an order—was drilled into me. My brothers and sisters heard it, too.

Nobody was very impressed. My mother was never going to lose her marbles.

On the other hand, Vermont does experience earthquakes from time to time. In 1962 there was one that rocked the State House, dislodging a support beam and cracking twenty windows. The State House is only twenty-three miles from my mother’s house.

“Maybe I’ll want to take care of you” was my standard response to the nursing-home prescription.

“Did you ever think of that?” Over and over, we had this conversation. Then my mother’s legs gave out, and we never had it again.

For the next five years, she lived at home. My husband and I lived with her, quitting our jobs and moving three hundred miles, doing odd jobs to make ends meet when we should have been chucking money into retirement accounts. At dinner, we sat on three sides of the kitchen table, my mother, my husband, and I. The middle seat was mine, a position that allowed me to surreptitiously kick whoever was misbehaving. Usually that person was my mother. “Try not to be so bossy,” she wrote in her final diary.

When I say that my mother’s legs “gave out,” I do not mean that she fell. She never fell, not once. As her legs deteriorated—muscles weakening, bones cracking—she kept herself upright through sheer willpower and a growing set of props. One of her canes had a metal tip with retractable teeth that would dig into the ice but not gouge the floors. Another was decorated with a butterfly motif. A third collapsed to fit into a handbag. She had a set of titanium trekking poles to use when the driveway was slippery. And she had me.

Sara Tucker has written headlines for the Louisville Courier-Journal, reviewed theater for the Albuquerque Journal, and edited articles about dusting for Martha Stewart Living. Everything she knows about winching she learned from the editor of Four Wheeler Magazine. At Condé Nast Traveler, she once played a singing reindeer in an office skit. At Cosmopolitan, she ran the copy department under Helen Gurley Brown. She has a house in Vermont and an apartment in France and divides her time between them. You can follow her adventures at sadieandcompany.blogspot.com