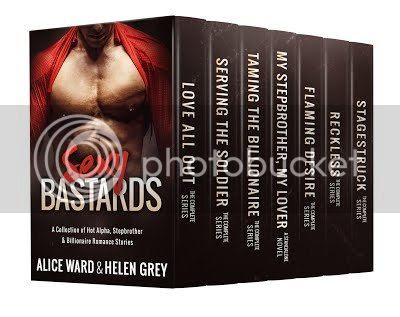 **Available for a LIMITED TIME, this boxed set contains over FORTY DOLLARS worth of books for only 99 cents!**

For the first time ever, bestselling authors Alice Ward and Helen Grey combine to bring you their complete collection of the sexiest, wickedest books—guaranteed to melt your heart and panties!

From hot and dominant soldiers to seductively bad stepbrothers and billionaire playboys, this TWENTY-EIGHT BOOK BOXED SET indulges every sensual desire you’ve ever had.

You know it’s true… everyone loves a sexy bastard…

“I don’t know about you, but I’m exhausted,” Drake said, pulling off his shoes. He stripped down to his silk boxers and crawled between the sheets. I moved to the foot of the bed and stood before him with a coy smile on my face.

“Before you nod off, I have a confession,” I began.

Drake raised an eyebrow and returned my grin. “Oh yeah? What’s that?”

“I spent more money today than you realized,” I told him as I unwrapped the belt of my wrap dress. “I wanted to show you how much I appreciate the way you’ve spoiled me today.”
The dress fell open, revealing the peach silk lingerie I’d found in a small boudoir shop. The translucent fabric clung to my curves, barely covering the crotchless panties beneath.

Drake pushed himself up in the bed and parted the sheets, nodding for me to slip in beside him. “You look stunning, Chelsea. I hope there’s more where this came from,” he added, stroking the soft fabric. He brushed the silk against my body and my hair stood on end, as if electrified. I reached between his legs and found him stiff and ready.

Drake lifted his hips off of the bed and slipped out of his boxers. He tossed them to the floor before lying on his side and pulling me into his arms. We kissed lightly, our lips barely touching, as the jet began to move.

“I have an idea,” I told him, sitting up. Drake moved with me as I fell back to the mattress, this time with my head near the footboard. I wanted Drake inside me as the jet climbed to the heavens, and he caught on to my plan without explanation. He left my side just long enough to fetch a condom and roll it down his eager shaft. He returned to the bed and I pulled him down on top of me.

Our lips met as the jet slowed to a stop again. I knew we’d reached the runway and were waiting for final clearance. Drake held me close and we kissed softly, our bodies pressed together. We moved in unison, our bodies seamlessly joining as the jet lurched forward again. As we bumped down the runway, Drake’s cock touched places inside me I’d never known existed.

“Oh my God,” I gasped as the force of the jet pushed him deeper inside me.

The front of the jet lifted off the ground and Drake wrapped his arms around me, holding our bodies together. I moved my hips in circles, grinding into him as I planted my palms on the footboard to hold myself steady.

“Jesus, Chelsea,” Drake moaned. “I didn’t know I could get so deep.” His hips moved in instinctive, rapid thrusts as we climbed into the sky. Essentially, we were hanging upside down, and all of my senses were distorted. Drake wove his fingers through my hair and gave it a quick tug just as his teeth clamped down on my earlobe. The mixture of pleasure and pain was overwhelming. I bucked wildly against him and reached ecstasy just as the plane righted itself. Drake let out an animalistic grunt and with one hard push, he exploded within me. He immediately collapsed on the bed, gasping for breath.

“Yes, it was,” I agreed, reaching for the bedside mini-fridge. I grabbed a cold bottle of water and took a long sip before passing it to Drake. He finished it in two long gulps and wiped his mouth with a sigh.

“So,” he said, pulling me back into his arms. He fingered my silk negligee. “Is there more where this came from?”

I smiled and nuzzled into his neck. “I guess you’ll just have to wait and see.”

I got right to the point. “I’ve been told that you’ve alienated one of the doctors—”

Startled, I almost laughed. “Didn’t take you long to peg him, did it?”

He shook his head. “I didn’t say anything earlier because I didn’t want to embarrass you for one, and for two, I’m not familiar with how things work at this hospital. But I did see the good doctor leaving the supply closet just moments before Vanessa did. I could tell by the look on his face and the smirk he gave you what had been going on in there.”

I said nothing, surprised that Matt had seen and not said anything.

“Look, I know stuff like this happens in the workplace—any workplace. But what’s the protocol here? Has that happened before?”

I nodded. “It’s a tricky situation,” I explained. “I can’t report him without evidence to back it up. You see, Matt, we’re just nurses… and as you know, nurses don’t have that much power when it comes to the doctors and surgeons.” I shrugged. “Most of the physicians here are good people. Still, there are some, like Doctor Linder, who take advantage. I’ve seen it happen elsewhere too. Santa Fe General is not unique.”

“He’s an arrogant ass,” Matt said. “But your point is well taken.”

I nodded and began to walk toward my car, not really surprised that Matt kept in step with me. I didn’t want to be rude and tell him to go away, because to be honest with myself, I didn’t. Still, I had to be careful. I was his mentor, even if it was only for the next couple of days. We would also be going on the ride-alongs with the paramedics in the morning. I was supposed to set a good example, but I didn’t suppose there was anything wrong with him walking me to my car, was there? Besides, it was getting dark, and I appreciated the escort.

“So Jessica, what do you do in your downtime?”

I glanced up at him in surprise. “Why?”

He shook his head. “Just an attempt at friendly conversation.”

We were steps away from my car now. I pulled the keys from my purse and pushed a button on the remote. My headlight and taillights flashed, and then I pressed another button. The back window popped open. Reaching for the door handle, I opened the door toward me. I looked up at him only to find him staring at the contents stowed behind the rear passenger seats.

He grinned. “For one, I just didn’t expect you to drive a Jeep,” he said, shrugging.

“Really?” I asked. “And what exactly did you expect I would drive?” Was he flirting?
“Oh, I don’t know, a Camry maybe, or a Ford Focus.”

I frowned and made a face. “I do a lot of driving between here and Colorado—”

I tucked my purse inside a plastic storage crate near the door like I always did, wondering why he stared so curiously at the items in the back. “Yes,” I replied. “I have several friends up there and we get together several times a year—”

He gestured to the supplies I kept for wildfire fighting neatly organized in the back of the Jeep. Ropes. First aid kit. Helmet. Protective gear. He then focused his attention on a pile of supplies tucked up against the back seat. A claw tool. A fire ax, shovel, and beneath the pile, the edge of a firefighter’s helmet. He stared from me to the supplies and back again.

“You’ve got quite a rig back there,” he commented. “Mine is almost exactly like it.”

I smiled. You’re an independent contractor too, own your own rig and gear?”

“Most of it,” he said. “If I’m close, I drive, which I’m sure you do as well, considering your choice of vehicles.”

I laughed. He had me pegged. It was a common practice with most contracted wildfire firefighters, hotshots and smoke-jumpers, especially those signed on with the National Forest Service or other agencies. Other than that, independent contractors like us would be grouped into teams and flown into trouble spots by the agency in charge, along with their equipment.

He gave me an appraising look. “Advanced ACLS?”

I nodded. I was Advanced Cardiovascular Life Support certified.

He grinned. I felt an odd sense of pleasure and pride.

I closed the back door and then turned to move toward the side of the Jeep. I thought he was going to step back, but he didn’t, and once again, I bumped into him. Felt his rock hard chest. My hand brushed up against his pants and I realized that he was sporting what I sensed was the beginning of a hard-on. Seriously? Just seeing my rig got him off?

He gently placed his hands on my shoulders until I regained my balance. He stared down at me, his expression serious. “I’m just going to throw this out here, Jesse—”

“Jessica,” I said, although my voice only came out a whisper.

I stared at him a moment, not sure he had just said that. Was he always so blunt? Again I felt the heat of the blush travel up into my cheeks, although I doubted he could see it in the growing darkness. Thank goodness for small favors. Desire surged through me. Would it really matter if I admitted the same? I quickly shook my head. Foolishness. I had enough to do without getting involved with someone like Matt. He was obviously a player. I too had seen the looks women had given him today; the contemplation, the open desire in many of their expressions. I might feel the same, but I certainly wasn’t going to admit it. I wasn’t as easy as Vanessa, that was for sure.

“Want to go have a drink, talk about this?”

I took a step back even though I longed more than anything to throw my arms around him, feel his lips on mine, and make out with him. “I don’t drink.”

“I don’t either, really,” he grinned. “Would it be totally inappropriate if I kissed you?”

The switch in topic startled me. “Yes,” I said, my eyes not leaving his for a moment.

Nevertheless, I didn’t move as he slowly leaned over me. He was going to kiss me. Every nerve in my body anticipated it while my brain kept shouting at me to walk away. Still, I had nowhere to go. My back was practically pressed up against the side of the Jeep. Matt was standing so close to me that I felt the heat emanating from his body. The truth of the matter was, I didn’t want to escape. I wanted him to kiss me. I just wouldn’t say the words.

He obviously didn’t need them. At first, the touch of his lips was light, feathery, and oh so soft. Then, the pressure gradually increased until I responded. Boy did I! My ears began to ring and I vaguely heard the sound of keys dropping. Oh God, I had never been kissed like this. I refused to contemplate exactly how skilled Matt was at kissing when the tip of his tongue caressed first my upper lip, then my lower one, gently urging my lips apart.

Alice Ward is the author of the New Adult series, RECKLESS.
Reading and Writing romance is her passion and she writes with her true heart.
Living in Miami, the beach is her favorite place to relax with her laptop and write her next spicy romance.
However, when she is not reading or writing romance, she also enjoys being with her beautiful family.