Release Blitz: The Dawn of Dae 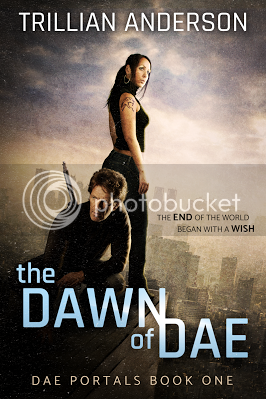 The chance to attend college is just what Alexa Daegberht needs to break out the mold of her caste. If she can become a Bach, she can escape the poverty she’s endured ever since her parents died when she was five. Only through education can she rise above her birth caste–and she knows it.

All of her plans fall to dust when she opens a portal within her refrigerator, turning her macaroni and cheese casserole into a sentient being. By dawn the next day, the mysterious dae have come to Earth to stay. Hundreds of thousands of people vanish into thin air, and as the days pass, the total of the missing number in the millions. Some say it’s the rapture of the Christian faith.

Alexa knows better: their dae ate them, leaving behind nothing more than dust as evidence of their hunger.

As one of the unawakened, she doesn’t have a dae, nor can she manifest any forms of magical powers. She’s lacking the innate knowledge of what the dae are and what they mean for the world. Now more than ever, she is an outsider. Her survival hinges on her ability to adapt to a world she no longer understands.

Unfortunately, one of the dae has taken notice of her, and he’ll stop at nothing to have her. Alexa’s problems pile up as she’s forced to pick her allegiances. Will she submit to the new ways of the world? Will she become some monster’s pawn? Or, against all odds, can she forge her own path and prove normal humans can thrive among those gifted with powers once the domain of fantasies and nightmares?

At least my standing at college wouldn’t be risked by inhaling residue from one of Kenneth’s cocktails. If they ever found out I was one of his associates, though, I was screwed. I relaxed and, without looking up from his floor, made my way around the couch closest to the door and plopped down on it. I heard him sit on his armchair, which squeaked as he leaned back.

“I’m not in the mood for your bullshit tonight, my little collie.” My boss lit up, and the stench of his cigar choked off my breath. I knew better than to cough, though. All I’d do was piss him off even more.

I chose to ignore the fact he was calling me by a dog breed instead of my name and nodded my agreement. At least he hadn’t called me Lassie.

If I followed the rules, I’d be okay. I’d leave his house just fine—and Lily wouldn’t have any extra reasons to hate me. Speaking only when spoken to, nodding when appropriate, and always, always addressing him by sir would get me through the meeting.

If the boss had a job for me and paid up, maybe I’d buy Lily a pair of lace panties—in silk. I could get them now, as long as I had the cash for them. All I had to do was survive the meeting with Kenneth and do one last job for him.

Kenneth’s voice was still soft, quiet, and utterly devoid of emotion, so I drew a deep breath, nodded my head obediently, and whispered, “Yes, sir.”

“Full-merit,” he commented, and his tone took on a rueful edge.

“Now how the hell did a little mutt like you get into Bach studies on full-merit?” he demanded, thumping his fist on the arm of his chair. He smacked it several more times before sighing gustily. “You’re something else, that’s what you are. I obviously wasn’t keeping you busy enough. I am to blame.”

Whoever had been meeting with him before I had arrived had left Kenneth in a bad mood, and his ire was directed at me. Any other day, I would have told him to go cry a river and fill the Chesapeake. I wanted to tell him to stuff it, but I needed the work, and he needed me.

I could go to the places he couldn’t, and he knew it.