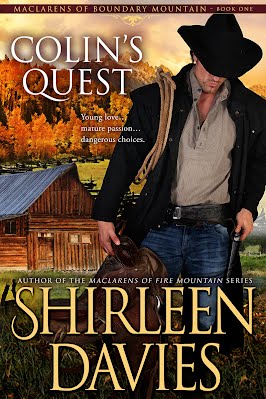 Colin’s Quest, Book One, MacLarens of Boundary Mountain Historical Western Romance Series
For An Undying Love…
When Colin MacLaren headed west on a wagon train, he hoped to find adventure and perhaps a little danger in untamed California. He never expected to meet the girl he would love forever. He also never expected her to be the daughter of his family’s age-old enemy, but Sarah was a MacGregor and the anger he anticipated soon became a reality. Her father would not be swayed, vehemently refusing to allow marriage to a MacLaren.
Time Has No Effect…
Forced apart for five years, Sarah never forgot Colin—nor did she give up on his promise to come for her. Carrying the brooch he gave her as proof of their secret betrothal, she scans the trail from California, waiting for Colin to claim her. Unfortunately, her father has other plans.
And Enemies Hold No Power.
Nothing can stop Colin from locating Sarah. Not outlaws, runaways, or miles of difficult trails. However, reuniting is only the beginning. Together they must find the courage to fight the men who would keep them apart—and conquer the challenge of uniting two independent hearts.

“You’ve changed since I last saw you.” Colin tightened his grip on her hand.
“Oh?”
“You’re even more beautiful than I remember.” Turning her toward him, he stroked his knuckles down her cheek, watching as her eyes glowed. She didn’t resist when he moved his hand behind her neck to draw her close. “I want to kiss you, Sarah.”
“Aye, it’s been too long.” She sucked in a breath, waiting, as he lowered his head, brushing his lips across hers once, then twice before taking her mouth.
Pulling back, he rested his forehead against hers.
“How many boys have you kissed while you waited for me?” He knew asking wasn’t fair, yet he couldn’t stop the words.
“I’ve kissed only one boy. You. Is it so obvious?”
He made no answer other than to place a trail of kisses down her face, stopping at the corner of her mouth.
“More, Colin. I want more.”
Seconds turned to minutes as the kiss heated, their arms tightening around each other. His hands moved to her hair, threading silken strands through his fingers as he positioned her for better access. Tracing her lips with the tip of his tongue, he encouraged her to open as his hands moved to her hips.
An intense shudder heated her body, her heartbeat pounding in her ears as she squirmed to get closer. The force of the desire she felt shocked her.
Feeling his hands tighten on her hips, sending an involuntary tremor through her and a strange aching in her limbs, she moaned against his mouth.
Breaking the contact, Colin pulled back, his breath coming in deep gulps. “We need to stop, lassie. We cannot continue like this.”
Her grip on him tightened, confusion replacing the passion he saw moments before.
His strong hands cupped her face as his eyes locked on hers. “If we don’t stop, we may do something you’ll regret.”
Her flesh tingled as his warm breath fanned her face. “Do you not want me, Colin?”
He mumbled a soft curse, realizing she thought his actions were a lack of desire.
“Nae, lassie. I’ve never wanted anyone more.”
Her tongue darted out to moisten her lips, her brows furrowing at his words. “I’ve waited five years for you, Colin MacLaren. I’ll not wait a minute longer.” 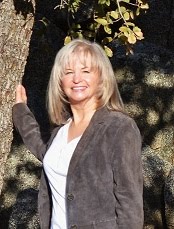 I have been writing most of my life, but only recently began the transition into fiction. Historical romance, contemporary romance, romantic suspense, and short stories are what keep me reading, so that is the focus of my writing.


I was born in California, grew up between a growing beach town and a small town at the base of the San Bernardino mountains. My mother originally planned to name me Katherine, but she read an article in the paper about a woman named Shirleen shortly before my birth, so instead of having a cool nickname, like Kate, I am simply Shirleen. My mainstays growing up were all the Nancy Drew mystery books; I loved them. Eventually I moved on to mysteries, suspense stories, crime novels, and romance. Pride and Prejudice will always be one of my favorites.

Besides California, life changes have allowed me to live in Oregon, Colorado, and Arizona. Everywhere I have lived has been inspirational in one way or another, giving me the opportunity to meet remarkable people with their own stories to tell. I've sailed, skied, owned horses plus lots of other animals, and ridden various off-road vehicles. I enjoy dancing, fishing, hunting, being the back-seater on my husband's Harley, traveling and, of course, reading and writing.

Prior to transitioning to writing fiction, I worked for Fortune 500 and many smaller, start-up companies. Fortunately, I regained my sanity long enough to start my own consulting firm, which I still maintain today.

My husband and I spend most of our time at our main home in the mountains of Arizona and our second home in Southern California. Between us we have five boys with growing careers and families of their own. So, from my perspective, my life is a success and always an adventure. I wouldn't change a thing; well, except finding more time to write.

I love hearing from readers, so please feel email me at shirleen@shirleendavies.com.
Join Shirleen Davies’ Newsletter to Receive Notice of:
· New Releases
· Contests
· Free Reads & Sneak Peeks
To sign up copy and paste this site address into your browser's address bar: http://bit.ly/1KqhKwm

a Rafflecopter giveaway
Posted by R.K. Emery at 1:00 AM