Blog Tour: DiSemblance with a #excerpt 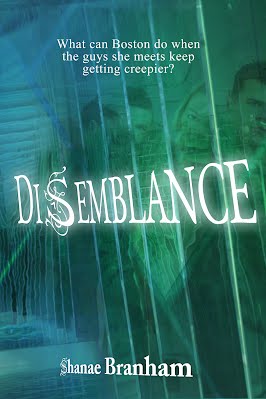 Jason Tanner lives between two worlds. Problem is, only one is real.
Inside the hologram machine 17-year-old Jason has everything his heart desires, including a digital simulation of his dead mother. While outside the machine, he’s forbidden contact with everyone. Living within the shadow of a serial killer, Jason is captivated by the beautiful girl next door, Boston Manning. Disobeying his father, he secretly cultivates a relationship with her.
For Boston life is divided into those that have and those that have not. Displaced in a new high school, she is determined to have the life she’s always wanted. But will her choices hijack her dreams and plunge her into the treacherous clutches of a serial killer?
As an action-packed romantic thriller, DiSemblance is sure to keep you guessing until the very end.

“A Marvelous, fast-paced thriller, sure to appeal to teen science-fiction aficionados and the uninitiated alike.”  ~ Jill Allen, Clarion Review

Boston steps through the hole she created in the alder brush onto a patch of grass between a straw-bale wall and the woods.


“Who’s there?” a girl calls from a blanket a short distance off to our right.


I shut off the flashlight and step through beside her, waiting for her instructions.


“Don’t worry, honey.” The male voice is coming from the same direction. “Whoever it is can join us. We’re just getting started.”


Boston drops the machete and bolts back into the woods heading down the trail. I switch on the flashlight and shine it at the voices. The creep that attacked Boston last night and a pretty blonde girl are sitting together on a blanket spread out beside the straw-bale wall. The girl is frantically buttoning her shirt. Hard-edge squints against the light. He’s getting around well, with a cast on his leg.


I pick up Boston’s machete and her backpack and trail her to the car, where she’s trembling in the driver’s seat. Confused by the sudden change of plan, I throw her stuff in the backseat, climb into the passenger side and wait for her to explain herself.


She stares out the front window for the longest time. Then she tosses her mask in the backseat and starts the engine.


Her face is pale as a ghost when she looks at me. “That’s Candice with Ricky.”


I know that her statement is supposed to mean something to me, but it doesn’t. “Who’s Candice?”


“She’s the girl I was going to warn about Ricky.”


“What?” Her tone is acid. “Tell my friend that the guy she’s making out with tried to rape me last night?”


“Yeah.” I don’t understand what she’s afraid of. If I were Candice, I’d want to know that I was hanging out with a rapist. “Wouldn’t you want to know?”


“But what if Candice doesn’t believe me? What if Ricky says those horrible things about my mother and calls me a slut, again?”


I’m not aware of any horrible things about her mother. “You’re not a slut.”


“Thanks.” She lowers her chin. “If that’s true, then why’d your brother take pictures of me?”


“Because he’s messed up and doesn’t understand people need to be respected.”


Her voice cracks when she speaks. “Why’d your dad let him?”


“Because he doesn’t know how to fix Isaac so he only focuses on his invention, hoping that we’ll be all right on our own.”


She’s accusing me of being the bad guy? I feel my pulse throb in my neck as I try to keep the anger out of my voice. “I saw the pictures of our neighbors that you threw away in your room. You didn’t take those pictures because you thought they were sluts, did you?”


Her body goes rigid. “Of course not.”


She draws her hand away from me. “So you’re saying I should go back!”


“Only if you really believe I should have stopped Isaac.”


She glares at me and turns the radio up so loud that the music destroys any chance of further conversation. After several minutes, she grabs the machete from the back seat and shuts off the radio. “I’m not scared!”


“I know.” But I don’t know. My heart is racing like I’m riding a fifty-foot wave.


Switching the headlights on, she presses on the gas pedal and speeds down Daemon’s driveway. Nearing the back of the maze, she turns onto the grassy section and plows through the edge of the woods moving towards Ricky and Candice. Branches crack and break against the windshield and scrape the side of the car until she stops in front of her targets. Bursting from the vehicle with the machete in one hand and the mini recorder in the other . . .

I am a professional writer with a bachelor's degree in creative writing and a minor in grammar. I have also attended several years of classes and workshops in screenplay writing at the Los Angeles Screenplay writer's Expo.

I love suspenseful, action-adventures and clean, young adult, romance stories. I was born and raised in a small town in Idaho. I am the second out of six children. When I was in my early 20's my mother was killed by a drunk driver. This one incident drastically changed my life. I have always had a passion for reading and writing fiction. Owing to a life long struggle with Dyslexia, early teachers discouraged me from pursuing a career in writing.

As I have spent over twenty-five years transforming my language disabilities into professional writing skills, God has honed my insatiable passion into an incredible vision.