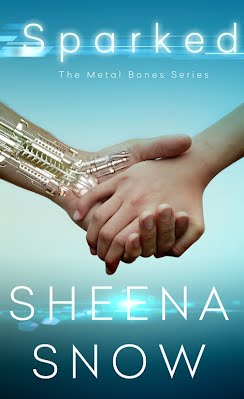 They weren’t supposed to have feelings.

Metal will Clash
In a not-too-distance future, robots composed of metal for bones, electric cords for veins, and synthetics for skin are now available. For purchase. Eighteen-year-old Vienna Avery’s home is going to change forever, now that her mom purchased an Italian Chef Robot to cook and reside in their house.
Secrets will Unfold
The government claimed robots were indifferent, unthinking pieces of metal and elastic—assistance for the help of humans. Vienna never believed much of what the government said. The pieces didn’t always fit. And now Vienna knows why, because she’s uncovered the government’s secret: that robots have emotions, sucking Vienna into the underground world of feeling, thinking, and sovereign robots.
Sparks will Fly
Alec Cypher is everything a robot is not supposed to be: deep, dark, and dangerously human. And for some reason, he wants to save Vienna from the government’s prying, vindictive eyes. Going forward, Vienna will have to learn to trust robots and battle the growing feelings she never thought possible . . . feelings for the green-eyed, soul-searching robot named Alec.

Chapter One
I never locked eyes with a robot before.


Never.
Not once.
I guess I thought it would feel different. But it doesn’t. Nothing is different. It feels the same, the same as looking into a human’s eyes.
I wanted to pry my eyes away but now that I’ve started, I can’t stop staring. Even from this distance, I could tell the robot’s eyes were a honey brown.
They are so close to being one of us. But they can’t be. They can never be us. Or at least, that’s what the government says.
The robot’s indifferent gaze shifted from mine and it strode toward my neighbor’s Lincoln Town Car. The robot’s gait caught with every third step and the elbow twisted incongruently when it opened the car door—the only telltale signs it wasn’t human.
This robot had dark-brown hair, tan skin, and was dressed in a chauffeur’s suit.
My neighbor, Mr. Romero, waved at me as he exited the car, and I just stood there, mouth agape and knees locked.
Mr. Romero frowned but I couldn’t wave back. I couldn’t move. I was frozen to that spot on my porch with my keys dangling from my fingers and my purse sliding down my shoulder.
It was just as the news had said. Everything was. From the eyes, to the nose, the lips, to the hair, it all looked so real. I had never studied a robot that wasn’t on TV; I was always too busy avoiding them. But when they weren’t moving, when they weren’t doing anything, when they were just standing there, they looked exactly like people. Exactly.
Together, they disappeared inside the house, Mr. Romero with his stout frame and wiry black hair, and his robot chauffeur.
I now lived next door to a robot.
The keys felt cold in my hand, and I realized for the last several seconds, my focus had been consumed by the now empty driveway.
Leave it to me to do something like that.
I opened the door and leaned against it as it clicked shut behind me. Everything was changing. And everything would be different.
“Mom, I’m home.” I shrugged off the door and into the family room.
“Be right there, Vienna.”
“Don’t worry about it,” I called back, hoping mom would leave me alone.
“How was shopping? Find anything you liked?” Mom appeared and wiped her hands on her paint-covered overalls. Mom was a die-hard artist. She lived, breathed, and probably ate paint.
At a whole head taller than me, Mom still looked great. Forty-five and thriving was her motto. Mom and I had wispy blond hair, pale-green eyes, and a small nose. Unlike me, her hair was cut in a bob-like fashion, the front angled longer, reaching past her shoulders, where mine was always in a ponytail.
I shook off my jacket and looked up into Mom’s bright, beaming face.
“I only went shopping,” I said, raising my eyebrows. “No need to look that—”
“You’ll never guess what I bought.” Mom practically sang the last word, cutting me off.
Head throbbing, I sucked in a deep breath and dropped my purse on the couch. “I have absolutely no idea.” I wondered how mom would react if she knew Mr. Romero had bought a robot.
“They’ve had nothing but good reviews.” Mom nodded, following behind me as I headed toward my room. “And you and your father are going to love him.”
I rubbed my temples. “I’m sure we will.” How could we not get excited about Mom’s latest painting gadget? “What does this one let you do?”
Paint with two brushes at the same time?
Mom darted in front of me, and spread her arms to block me from going any further.
“What’s going on?” I looked from side-to-side.
“I named him Robotatouille.” Mom nodded as if that solved everything.
“I’m sorry?” I shook my head. What in the heck was Mom talking about? “You named what Robot . . .” My breath caught in my throat. My stomach flipped. “You . . . you did what?” I repeated.
Mom’s eyes lit up and suddenly, it was like all the energy in my body had been stolen from me, sucked out, leaving me dry and empty.
“N-N-N-o,” I breathed.
Mom wouldn’t—
“Everyone’s getting one,” Mom said.
My legs shook.
“Did you know Mr. Romero just bought one yesterday?” Mom asked, face glowing while it felt like mine had lost all of its blood. “And you’re going to love him. Look.” Mom winked at me and stepped back to pull a sandy-blond brown-eyed twenty-something-year-old man from behind the kitchen wall.
I couldn’t breathe.
Air was trapped in my body, as I stood there, gaping, into this man-robot-thing’s eyes.
Brown eyes. Sandy-blond hair.
I jerked backward and stumbled into the coffee table.
The robot was right in front of me.
No.
Freaking.
Way.

Sheena Snow, contrary to her name, lives in South Florida and has only seen snow once. But she would love for it to land on her eyelashes and sparkle in her hair. She loves painting, candle making, orchid shows, tattoo conventions, hockey games and library book sales! After college she landed a full time job but kept serving pizza on the weekends and writing stories about characters she wished really existed, characters who never gave up no matter the obstacles life threw at them. At the age of twenty-six, she sold her first book and bought her very first puppy, a wonderful Yorkie named Aladdin.