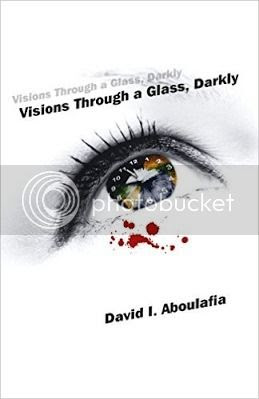 Two days, eighteen hours, fifty-eight minutes…The time of your life on this earth. Richard Goodman is the caretaker of a unique institution that trains disabled youth in the art of watchmaking. But he is no ordinary administrator. He possesses extrasensory powers he does not fully understand and cannot control.

But an innocent outing to Coney Island results in him obtaining a more disturbing ability, along with a terrifying prophecy that he will die in less than three days. As the clock of his life counts down, a still greater threat emerges. An uncanny assassin who will destroy everyone he knows and loves.

Unless he can discover who the killer is. And stop him in time.

Praise for Visions Through a Glass, Darkly:
“A taut novel of suspense with a thread of the supernatural, Visions Through a Glass, Darkly seizes the reader’s attention and will not let go. Lurking underneath the saga of a psychic’s imminent mortality and the threat of a ruthless murderer are deeper thematic questions about the essence of human free will. An unforgettable, dizzying kaleidoscope of a thrill ride!” – Micah Andrews, Midwest Book Review

Kara lies unconscious on the bed. The light bed covers accentuate her slightly swollen midsection. Richard pulls the covers back and places his hands there gently, ever so gently, looking up towards her eyes. Tears stain his face and it is all he can do to prevent bawling outright. He chokes back his anguish.

And then he feels the movement, almost imperceptible, like a feather gliding over water, raising his fingers ever so slightly.

She is alive. He knows she is a girl, and that she is his child, without having to consider how he knows.

I’ve got a special announcement and I want to be in a fun place, DIG?

He looks at Kara again, and tries at the same time to catch any stirring with his peripheral vision. Before him lies his hope for a future, just trying to survive a little longer now in her warm dark place.

He forgets for a moment that the doctor is here. If she has noticed his blood covered clothing, she hasn’t let on that she has. She isn’t very old, this doctor of medicine, her human feelings not yet hardened to cold steel by a thousand unpreventable demises, her eyes not yet blinded to the suffering of the infirm, her ears not yet closed to the cries of the dying and those who love them.

He senses her spirit. She holds suffering at bay by the force of her will. She has acquired skill, and knowledge, and uses these as her weapons in her daily battles with the horrifying aftermath of blind fate, or poor choices, or bad luck. Sometimes, she prevails.

She has also gained wisdom, enough to know that every victory is fleeting, that she may hold the bastion for only a little while, and that ultimately she is powerless to halt the advance of time, or death. For we are all so fragile; each of us and all of us together; so breakable, so faulty.

And Richard knows that she feels this, as well: That whatever it is she truly clashes against, that one day it will stop, and turn around, and reveal itself to her, and she will see It as if for the very first time. And then It will take her, as if in payment for the lives she has stolen.

Richard looked up at the physician, afraid of the truth he would see in her eyes. He never got that far, really. The Wave swept over him as it never had before, as if it had a weight and a mass all its own, robbing the oxygen from the air, choking him, catching the hope in his throat and making it impossible for him to speak. It covered him in a dank blanket of misery and wretchedness, pushing him far past the point where he was even capable of articulating the question “why,” to a desolate place where that word has no meaning, where the only explanation in reply is “because.”

The Wave forced his eyes closed and compelled him to See, and what he perceived was himself as a character in Dostoevsky's novel, standing there on a rock three feet wide by three feet long, looking out over an endless sea with no other land in sight, with lightening crackling in the air and rain pouring down relentlessly, forever and for always, that black storm cresting, that ageless ocean lying before him until the end of time, he and It, he and It and nothing more; loneliness, true loneliness, killing the spirit and the soul but unmercifully leaving the body alive, leaving nothing but the husk of a man containing his skin, his bones, and his internal organs; lungs breathing, heart beating, body wracked by pain, pouring sweat, unwilling to stand but unable to fall, no reason to live but unable to die; not a scavenger in the sky, not the lowliest insect crawling on the ground, not even the dorsal fin of some fearsome beast below, nothing and no one, forever and for always alone alone alone.

Here is fear, here is the end of all things, where all roads terminate, where all horror truly begins, where It lies and lives and rules and lords over nothing and everything; unspeakable dread where time does not exist, beyond reality, beyond the imagination of any reality, the mouth of the demon, the Center, the core, not a star in the firmament nor the faintest hope that there ever was, that there ever could be, that there ever will be, not here.

Forever and for always. He was to be alone. 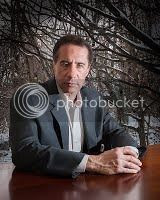 David I. Aboulafia is an attorney with a practice in New York City. He is also the author of “Snapshots from my Uneventful Life,” an irreverant collection of comedic essays.