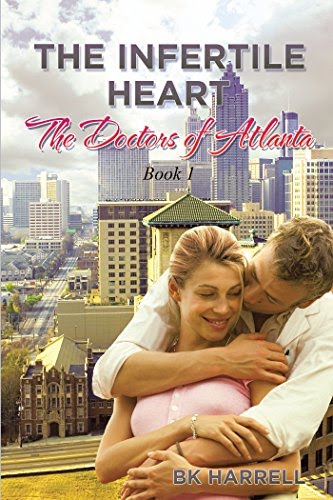 Dr. Lincoln Montgomery is a man who has lost everything but longs to find a connection to someone who he can share his life with, but he fears he will never find the love again that he lost.
The hero of my recently completed novel, The Infertile Heart, has finally found the woman who can complete him, but will their past prevent them from having a future.  Set in Atlanta, GA, this character driven story is a 112,257-word contemporary romance.  Adventuresome and sensual, the book weaves a story of love and loss, lies and truth, and the story of two people learning to love again even though the trials and tribulations they face will stack the cards against them.
An overachiever, Dr. Lincoln Montgomery is a Noble Prize winning billionaire who has spent his life giving others what he could not give to others.  Losing his brother to cystic fibrosis he was driven to find a cure for the gene mutation that took his life.  Even given his success, he could not prevent the death of his wife and unborn child to a drunk driver and spent the last three years mourning their passing and trying to find a way back.  A chance meeting plunges Lincoln back into the dating pool with the one woman he thinks could fertilize his infertile heart.
Dr. Nicole Harris is a physical therapist who has struggled with the decisions she made as a teenager.  Drugged and raped by her date at 14, Nicole ended up pregnant and gave her child up for adoption in order to ensure that she would have a good life.  Finding the perfect family that would keep Nicole abreast of Aubrey’s developments was fear number one priority.  Having given up on love and finding someone who would appreciate her for the woman that she was, Nicole had grown to be.  Feeding her love of golf and football, Nicole meets Dr. Lincoln Montgomery.  Could Lincoln be the one to fertilize her long dormant infertile heart.

Okay, I really enjoyed this one. I really liked the meeting and development of relationship between Lincoln and Nicole. I think it was well done and believable.

This was a heartwarming Romance with great characters and a smooth flowing plot.

I liked the emotion the author was able to evoke. I liked the stand up man that Lincoln was, even though Nicole didn't understand his motivations.

I liked their progression once their relationship started to change and they were honest with themselves and each other.

About the Author
BK Harrell is former Navy physician who has had a long love of writing.  He specializes in medical, military and sports romance writing.  He began seriously writing while deployed to Afghanistan in 2012 and has never looked back.  Whether he is teaching, serving his country, educating people about the fine art of cigars, practicing medicine or spending time with friends and family he uses his diverse background to shape the world around him through words.
He uses his unique experiences and love of all things Atlanta, University of Georgia and sports to weave intricately detailed stories focused on Atlanta and the surrounding areas.  His goal is to bring the same joy and excitement he sees in his own city to the readers and to allow them to experience the city through his eyes.
Dr. Harrell is married to his beautiful wife Erin, a proud graduate of Auburn University, which makes multiple appearances in his books, and their wonderful one son.  Dr. Harrell is a native of Augusta, GA and a proud graduate of the University of Georgia, Emory University, and proud to have been a member of the first ever graduating class of Georgia Campus Philadelphia College of Osteopathic Medicine.  He currently resides in the Atlanta area where he practices medicine and raises his family.