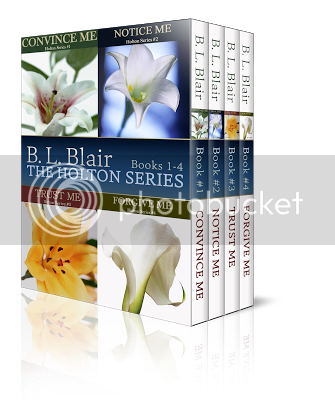 Convince Me
Anna West just wants to start over in a new town far away from her past. The only child of a mixed race couple, Anna learned about the ugly side of human behavior at an early age. After watching her abusive father mistreat her mother, Anna knows that love is not for her.

Steven Carson has always known what he wanted, and from the moment he saw her, he wanted Anna. Steven is ready for love. He is ready to settle down, start a family, and he knows Anna is the one for him. Now all he has to do is convince her.

Notice Me
Andrew Moore has always thought of Victoria as family. She is his best friend’s little sister and his little sister’s best friend, but recently something has changed. Andrew is thinking about Victoria in a completely different way. She will never fit into his quiet, conservative world. They are too different to have a future together, but he cannot stop noticing her.

Victoria Carson has been in love with Andrew since her sixteenth birthday, but Andrew never noticed her as anything other than the girl next door. She fled from her hometown so that she wouldn’t have to watch Andrew build a life with someone else. But things have changed. Andrew is now a widower, and Victoria has returned home. It is time to make him notice her.

Trust Me
Rachel Lewis hides her looks behind dark framed glasses and drab clothes. As the head librarian in Holton, she is satisfied with her life and her appearance. Rachel isn't looking for love or a relationship, but Paul captivates her. He lives in a completely different world, but she wants him more than she has ever wanted any other man.

Paul Hart is handsome, rich, and successful. As the owner of a thriving business, he is happy with short-term relationships and jaded women. Paul has been betrayed too many times to trust a woman, but Rachel intrigues him. She isn't like any other woman he has ever known. Can he learn to trust her?

Forgive Me
Growing up, Mitch Carson had always dreamed of leaving Holton, Texas, traveling the world, and writing life altering stories. As an investigative journalist, he made those dreams come true, but he left behind the only woman he ever loved. That was his greatest mistake. Mitch has returned home to see if she can forgive him for leaving her when she needed him the most.

In high school, Emily Fairview had fallen deeply, madly, and completely in love with Mitch. The two of them planned a life together far away from Holton, but when Emily’s family needed her, she chose to stay. Mitch chose to leave. Fifteen years later Mitch is back and wants a second chance, but Emily doesn’t know if she can forgive him. 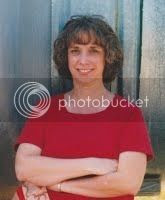 B. L. Blair writes simple and sweet romance and mystery/romance stories. Like most authors, she has been writing most of her life and has dozens of books started. She just needs the time to finish them.

She is the author of the Holton Romance Series and the Leah Norwood Mysteries. She enjoys reading books, writing books, and traveling wherever and as often as time and money allows. She is currently working on her latest book set in Texas, where she lives with her family.